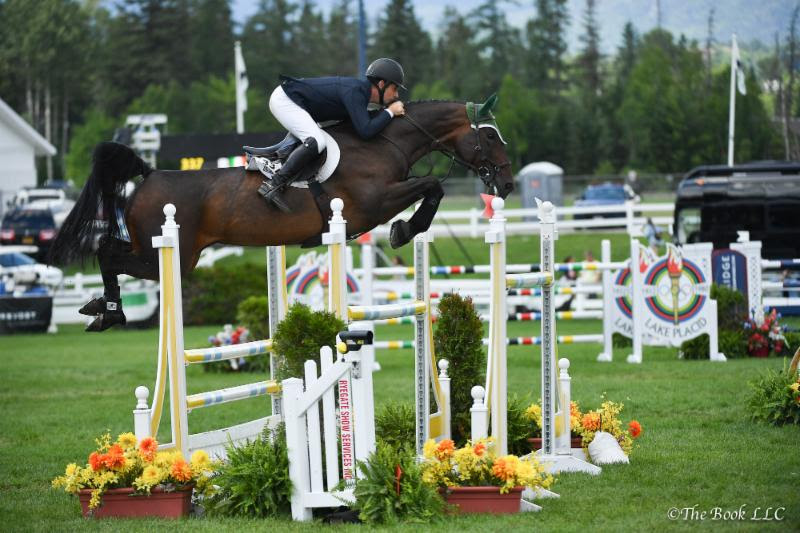 Thirty horses tried to master the 15-jump course designed by Olaf Petersen, Jr. of Germany and while several came close, none could until Babington, 22nd in the order, entered the ring on his 11-year-old, Hanoverian mare. Riding in his first Grand Prix since winning the Grand Prix at Devon on June 2 on his Irish Sport Horse, Mark Q, Babington turned the trick and waited to see if anyone could match his ride and force a jump-off.

“There were still some good ones after me so I was holding my breath,” he said, “and the truth is a few of them almost made it but they were a bit unlucky at the last fence.”

In fact three entries after Babington were clean until the last fence — Michael Hughes on Sans Soucis Z, Laura Chapot on ISHD Dual Star and Andrew Kocher on Ciana. “Dual Star has a big stride and I probably should have left one out coming to that last fence,” said Chapot who rode the Irish Sport Horse to the win in last year’s I Love New York Grand Prix at Lake Placid. “And Quointreau I think I overrode a little to the liverpool.”

“The last line really was very difficult,” said Babington. “My mare is very careful and I knew I could put a little pressure on her and she came through beautifully for me. I’ve been riding in Devoucoux saddles for 10 years and I’m really happy to win their Grand Prix here in Lake Placid which has always been a very special horse show for me.”

The win without a jump-off marked only the second time that has happened in the Grand Prix of Lake Placid. It was done in 1999 by Molly Ashe on Resolute. It also happened in Lake Placid’s I Love New York Grand Prix in 2009 when Charlie Jacobs won on Secret Love.

Earlier in the day, Raleigh Hiler swept the top two places in the $5,000 The Wild Center Children’s Jumper Classic, a member event of the North American League (NAL) and Washington International Horse Show (WIHS) Series. Hiler topped a field of 39 horses, seven of whom reached the jump-off, winning the class on Tinka’s Queen and placing second on Baldine. Third place went to Robert Matz on Venturesome.

In the $10,000 Mirror Lake Inn Junior/Amateur-Owner Jumper Classic, Addison Gierkink emerged victorious after a thrilling jump-off, winning the class on Denver Van’t Goemanshof. Eleven of 34 horses turned in clean first rounds to reach the jump-off in the Show Jumping Hall of Fame Jumper Classic Series event with five also going clean over the tiebreaker course. Gierkink was the last to go in the jump-off and she blazed over the course in 36.428 seconds to edge Callie Smith who finished in 36.560 seconds on Attention Et Z and Catherine Tyree who finished in 36.574 seconds on Don’t Go.

Action in the Richard M. Feldman Grand Prix Field also featured the Juliam Farm Lead Line Class and the C.M. Hadfield’s Parade of Champions which recognized horses and riders that won championships during the horse show.

With the conclusion of the Lake Placid Horse Show, the I Love New York Horse Show moves onto the North Elba Showgrounds, starting Tuesday and continuing throughSunday, July 10. The I Love New York Horse Show features the $100,000 Equine Insurance Services/Great American Grand Pix on Saturday, July 9. Admission to the horse show is just $2.00 on weekdays and $5.00 on weekends. Children under the age of 12 are admitted free. Discounts are available for groups of 20 or more.

For a behind the scenes look at the horse show, guided walking tours are offered on Wednesday, Thursday and Friday at 11:30 a.m. The tour groups meet at the horse show retail booth, and the tours, costing just $1.00, last approximately one hour.

Those unable to attend the horse show can watch all the action live on line via ShowNet on their newly redesigned website at www.ShowNet.biz.