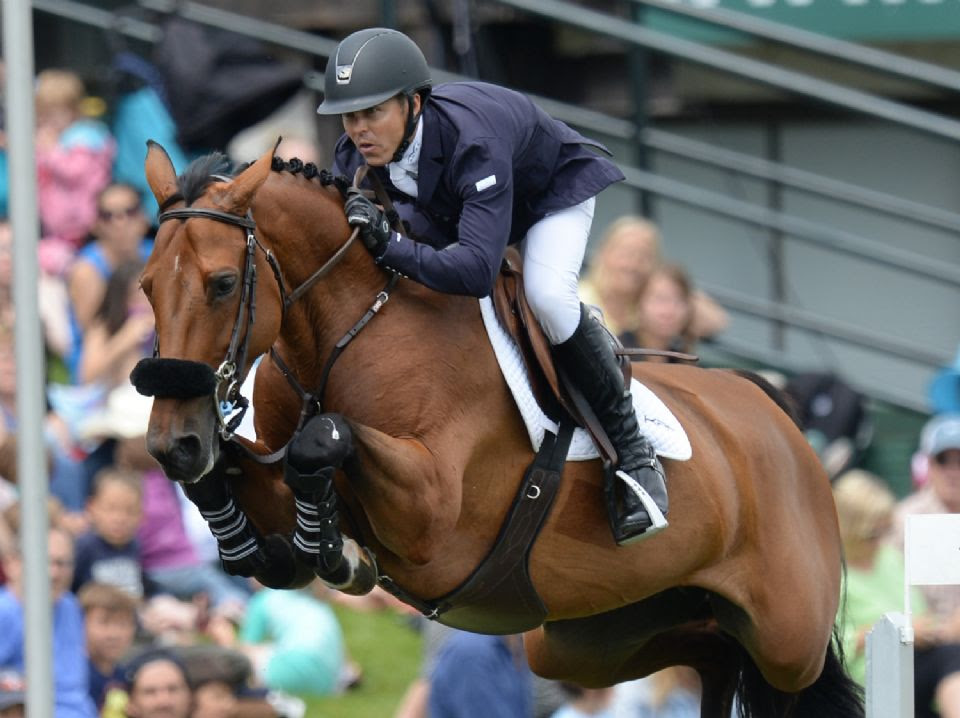 Earlier in the day, Canada’s Tiffany Foster took her second international win of the week with Brighton in the Imperial Winning Round 1.50m. The ‘North American’ Tournament, presented by Rolex, concludes on Sunday with the Enbridge Classic Derby.
Watch highlights from Saturday’s competition at Spruce Meadows!

Course designer Santiago Varela (ESP) set a challenging first round track for the competitors in Saturday’s $500,000 ATCO Queen Elizabeth II Cup. The competition took place over two rounds with a jump-off if necessary. The first round was a speed track against the clock, which saw 39 entries in total. The top twelve competitors from the first round then returned for round two in reverse order of penalties. Seven entries jumped clear over the first round course, and six of those also cleared the second round track to necessitate a jump-off.

Heading into the third and final tiebreaking round over a shortened course, Jonathan McCrea (USA) was first to go aboard Candy Tribble’s Aristoteles V. The pair completed another clear round in the jump-off to eventually finish fourth with a time of 45.52 seconds. Hardin Towell (USA) and Jennifer Gates’ Lucifer V had one rail down in the jump-off in 45.33 seconds to place sixth. Next to go, Kent Farrington and Gazelle raced through the timers in an unbeatable time of 40.59 seconds. Tiffany Foster (CAN) and her own and Artisan Farms LLC’s Southwind VDL followed with the fifth place time of 46.04 seconds. Eric Lamaze then jumped the third place time of 43.98 seconds riding Artisan Farms and Torrey Pines Stable’s Check Picobello Z. Last to go, Elizabeth Gingras and Zilversprings galloped into second place in 42.63 seconds.

Farrington and Gazelle have had an impressive summer that includes also winning the $375,000 Pan American Cup, presented by Rolex, during last week’s competition at Spruce Meadows.

Commenting on her stamina, Farrington stated, “That horse has really come on strong. One of her strengths is that she has a lot of blood and a lot of energy, so she kind of gets better as she goes.

“I don’t want to say I am totally surprised because I always thought she was a very good horse,” Farrington said of Gazelle’s recent success. “I got her when she was seven and I have been bringing her along now for the last few years. She has had her ups and downs like all of them. You never know what they are going to be in the end. She hit a little bit of a rough patch when I put her in some bigger classes and she got overly careful and was struggling a little bit, so I dropped her back down at the end of Florida, did some smaller classes and built her back up. I always had hopes that she would be where she is today, so I am very pleased.”

Course designer Santiago Varela had the difficult task of setting three different tracks for Saturday’s coveted competition, which has seen wins from some of the best in the sport. Farrington first won the event in 2014 aboard Voyeur, and spoke of this year’s courses.

“I thought he (Santiago) had a measured first round,” Farrington detailed. “It was difficult, with a short time allowed that put a lot of pressure on people, and probably caused some rails that they normally would not have. He only ended up with seven clear and a couple with time faults. That is usually the right number so that you still have a chance for a jump-off. I’m not sure, but I think that was his plan. The second round was a little more straightforward with a difficult line at the end. That was sort of the big test of the competition with the double liverpools. That is always difficult to jump, and still there were enough clear, and a great competition in the jump-off.”

Farrington went third over the short course with three fast riders still to come. Explaining his strategy, the rider stated, “I am not one that really plays it safe. I like to try to win and I do not think you win as much if you are playing by trying not to lose. I usually have my own plan of what I think is within the horse’s ability, and I try to work within those limits, and make the most of that track for what my horse can do.

“I never think that my time will hold up until the competition is finished,” Farrington added. “I am not that confident, because I think that is when you get caught, but I thought I put a lot of pressure on everybody else to really have to try.”

Elizabeth Gingras definitely had to try for her second place finish with Zilversprings, a 12-year-old Dutch Warmblood gelding (Silverstone x Emilion) that she has had for three years.

“I have been watching Conor Swail, and Kent, and Eric all tour, and they are all so fast,” Gingras remarked. “I just went as fast as I am capable of at this point in my career, and hopefully I will just keep watching them and get as fast as them, or maybe even faster.

“Obviously I am really thrilled,” Gingras said of her result. “My horse was absolutely amazing. I am just so happy to have him back again. We had a little hiccup for a while, so I have been building him all tour, and to end on this note is really great. He is very special to me.”

“I think it was a very good competition,” Varela stated. “We tried to put the pressure more in the first round than the second one to keep the horses fresh to be in the jump-off, and at the end it was a very great jump-off, and I am really happy. I would like to thank the committee for giving me the opportunity to be here. It is very nice to have the possibility to build here at this special show.”

Varela’s next stop is the Olympic Games in Rio de Janiero, Brazil, as a Technical Delegate. Farrington is also on his way to the Olympics, as he was recently named to the U.S. Show Jumping Team with Amalaya Investments’ Voyeur.

Until then, Farrington goes to the World Equestrian Festival at CHIO Aachen in Germany. Gazelle and Uceko both fly there to compete next week. They will then have a short break before heading to their next stop in Valkenswaard, The Netherlands, at the beginning of August.

Canada’s Tiffany Foster took her second international win of the week with Artisan Farms and Torrey Pines Stables’ Brighton on Saturday. Competing in the Imperial Winning Round 1.50m, Foster and Brighton proved consistent over two rounds of competition to take top honors in front of an electric Calgary crowd.

Thirty entries started over the Santiago Varela (ESP) designed course, and 12 competitors jumped clear in round one to qualify for the winning round, in which they started again with zero penalties. The combination that then had the fewest faults in the fastest time in round two was the winner. With eight clear competitors over the second round course, Foster and Brighton came out with the victory in the fastest time of 47.92 seconds.

Foster was overjoyed to get another win. She stated, “I just think this horse is so cool and so great. He is awesome. I do not know how he can keep going so fast and stay so high over the jumps all the time. He is so good, and I am so happy and proud of him. It was such a fun competition.

“I am amazed at how fast he goes every single time,” Foster laughed. “He does things that I do not imagine any horse can do; he is not normal. It is really fun because you do not have to play by the rules with him. You can come as fast as you want to a plank, or a skinny, or a vertical. The rules do not apply, so it is just so fun.”

Teammate Eric Lamaze held the leading time before Foster entered the ring, but she had not seen his round and took advice from Yann Candele to “go full speed.”

“Normally Eric beats me,” Foster admitted. “I did not actually see anybody in the jump-off. My plan was to come up early enough to watch Eric, and I did not make it in time. The thing is, Rosie (Rosana du Park) is such a fast horse, so generally if all the poles stay up and he does all the strides, it is almost impossible to beat him.

“The only thing I think I had working in my favor today was that the lines were a little on the half-stride,” Foster detailed. “Eric had already done the leave-outs in the first round, and I had not done them just because my horse does not have quite the same stride length as his. So me doing the same numbers, I can go faster just because I have to be kicking the whole way to get there, and Eric can do it a little bit easier. There was one turn to the double-verticals today that I was not planning to do, and then I went in the ring and they said Eric did it, so I knew I had to. I just kind of closed my eyes and hoped for the best, and my horse is incredible and it worked out.”

There were still a few more rounds after her time was set, so Foster waited anxiously to see if it would hold, but stayed back in the warm-up ring.

“I did not watch at all,” she stated. “I find here at Spruce Meadows, it is better to just not watch and listen for either a groan or a cheer from the crowd, and then see how it goes. Honestly today, even if I had ended up in sixth place, I was so thrilled with him. I could not have been happier.”

The ‘North American’ Tournament, presented by Rolex, concludes on Sunday with the final day of competition for the 2016 Spruce Meadows Summer Series. The Enbridge Classic Derby will be held first in the International Ring, followed by the Spruce Meadows 1.45m Classic, presented by Kubota.

Photos © Spruce Meadows Media Services. These photos may only be used in relation to this press release and with photo credit.
About Spruce Meadows
Based in Calgary, Canada, Spruce Meadows is the creation of the Southern family who built a Show Jumping complex at the foothills of the Alberta Rocky Mountains. It was in 1976 that the first Spruce Tournaments were held, with annual spectator attendances reaching over 50,000 by the end of the decade. Today, Spruce Meadows boasts one of the greatest outdoor equestrian venues in the world and offers an incredible experience for riders and fans alike. Spruce Meadows focuses on the organization and hosting of show jumping tournaments of unmatched quality for junior, amateur and professional athletes in a manner that reflects basic family values in a clean, green and welcoming environment that celebrates the horse and encourages the breeding and training of quality sport horses and the teaching and development of athletes. For more information on Spruce Meadows, please visit www.sprucemeadows.com.