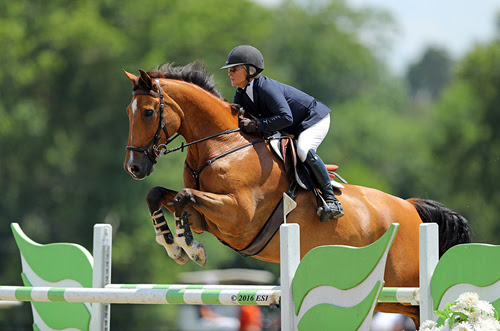 Culpeper, VA (July 19, 2016): As the third week of competition at HITS Culpeper came to an end, riders descended on the Grand Prix ring at HITS Commonwealth Park to vie for a victory in the $30,000 HITS Grand Prix.

Maryann Charles of Southern Pines, North Carolina, and FVF Sailor Man, owned by Fox View Farm, have been knocking on the door all season at HITS Culpeper. They have brought home two third-place ribbons in the Week II and Week III $25,000 Brook Ledge Grand Prix combined, as well as third in last Sunday’s $30,000 HITS Grand Prix. This Sunday, that knock blew the door down as they captured the coveted blue-ribbon and the biggest slice of the prize purse.

Eight advanced to challenge the jump-off over the course set by Bernardo Cabral of Lisbon, Portugal with five producing clear jump-off rounds in a race to the top of the leaderboard.

First to challenge the shortened course was Harold Chopping of Southern Pines, North Carolina, and Contefino 6, owned by Caroline Russell Howe and Lisa Tolnitch. Chopping has consistently been in the top placings at HITS Culpeper since Week I in April, in addition to winning Friday’s $25,000 Brook Ledge Grand Prix with another mount. They laid down a speedy, clear trip to set the tone for the class in 38.999. The round would eventually earn them fourth-place.

Following Chopping was Manuel Torres riding out of Waterford, Virginia, and Christofolini H, owned by Andrea Torres Guerreiro. Torres rode the powerhouse bay gelding through the timers in 38.846, just fractions of a second quicker than Chopping to move up in the rankings. They would ultimately earn the third-place prize.

Another clear jump-off round appeared for the crowd with Kevin McCarthy and Analyze This, owned by Kimberly Jakubowski. The North Salem, New York equestrian conquered each fence, and clocked in fault-free in 43.474 — which would eventually give him and his mount the final spot in the top five for their efforts.

Hometown rider Brook Kemper of Culpeper, Virginia, entered the ring next aboard Classified. Kemper and classified have been moving up the placings this season at HITS Culpeper, with a sixth-place finish in Week I’s $30,000 HITS Grand Prix, and fourth-place finish in Week III’s $25,000 Brook Ledge Grand Prix. They put down a dynamite round in 37.719, shaving a full second off of the leading time. The round would come close to the victory for the eventual second-place prize.

Thaisa Erwin followed Kemper with Matilda. A heartbreaking rail at the last fence would keep them out of the top five, but would earn them seventh in the ribbons.

The victors, Maryann Charles and FVF Sailor Man were next to contend. They took to the shortened course with speed and precision, clocking in fault-free with a lightning-fast round in 36.736 for the win.

Two more contenders were left in the order after Charles’ leading round. Mary Lisa Leffler and Carlot, owned by Rolling Acres, put down a valiant effort, but a refusal at the second fence would ultimately earn them eighth-place in 53.583.

Harold Chopping and Basje, winners of Friday’s $25,000 Brook Ledge Grand Prix, were the final pair to test the jump-off. The crowd cheered as they went in no-hold-barred across the course. They flew towards the timers with a win on the horizon, but a heart-breaking rail a the last fence would keep them from the victory. They clocked in at 34.280 with four faults for sixth.