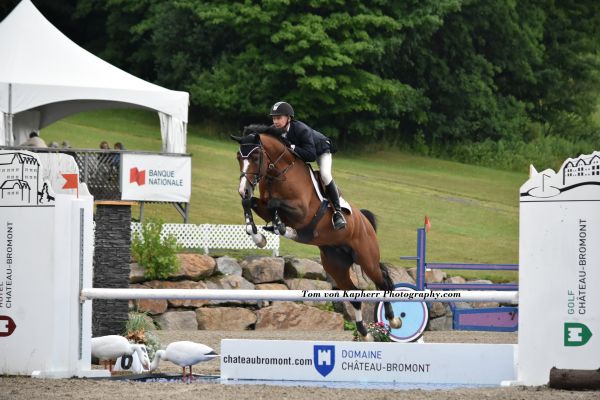 The Modified Grand Prix event had 28 horse and rider combinations competing, including Mario Deslauriers, his daughter Lucy as well as the winner of the FEI opening event of July 22nd, American rider Andrew Kocher.

Only eight pairs made it to the jump-off, including two Canadians, Bianca Lafontaine (QC) and Keean White (On), who were joined by the U.S. contingent of Mario Deslauriers, Lucy Deslauriers, Lauren Tisbo and Andrew Kocher, who again counted three mounts in the Top 10.

The course, designed by Leopoldo Palacios, comprised of 12 obstacles for 15 efforts really challenged the teams. Obstacles #6 gave the riders the option of jumping the river or taking a longer course where time made it difficult to jump the vertical.

Mario Deslauriers, a native of Bromont, positions himself on his mount Curo, as the one to beat right off the bat, clocking in the fastest time, followed closely by Andrew Kocher on Zantos II.

First out for the jump-off was Keean White on Corette, establishing a reference time at 39.33 seconds with a clear round, but were nevertheless beaten by Andrew Kocher on Prof de la Roque.

Back on his second mount C’Havinia, Kocher went for it and had the fastest time in the jump-off, but a bar down at the second obstacle costs him the victory. Mario Deslauriers followed with Curo where he showcased his talent, executing the fastest clear round in 36.49 seconds.

The firstweek of International Bromont ends Sunday with the presentation of the Québec Original Grand Prix at 2:30 p.m. The Royal Canin Challenge will take place around lunchtime.

The International Bromont presents its 41st edition in the picturesque setting of the Bromont Olympic Equestrian Park, in the heart of the beautiful Eastern Townships region. For more information on the programming, please visit our Web site at. www.internationalbromont.org.

International Bromont would like to thank the Ministère de l’Éducation, de l’Enseignement supérieur et de la Recherche as well as the Ministère du Tourisme du Québec for their support. General admission: $10 per person and free for children 12 and under. Preferred admission: $ 25 per ticket.

$10 per person, free for children 12 and under
VIP Tables: Tables seating four or six or eight

For reservations call Kristel Glockner (450) 534-0787 or email glockner@internationalbromont.org
Parking:Available on the grounds
Directions:

The International Bromont is a non-for-profit organization. All profits are invested in equestrian activities, Bromont Olympic Equestrian Park venue and grassroots development. Supporting the International Bromont makes you enjoy two weeks of great CSI competitions with the Quebec friendly sense of hospitality, while achieving your marketing objectives and gaining visibility.

HUNTER CHAMPIONS ARE CROWNED AT THE 2019 PENNSYLVANIA NATIONAL HORSE SHOW