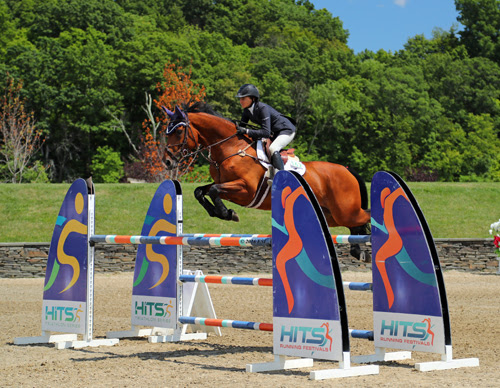 (C) ESI Photography
Laura Chapot and Out of Ireland on their way to a $10,000 Brook Ledge Open Welcome Grand Prix win.

The team to beat was Laura Chapot of Neshanic Station, New Jersey, and Out of Ireland, owned by The Edge. After an eight-place finish in last week’s Brook Ledge sponsored class, the two captured a major upgrade with the Week V blue ribbon. Chapot also reaped the red ribbon piloting Umberto, owned by Mary Chapot, a consistent contender in ribbons all season.

Thirteen would conquer the course set by Florencio Hernandez of Mexico City, with nine producing double-clears in the immediate jump-off, where the class would boil down to survival of the quickest. Riders and their mounts were met with a challenging test that boasted tall verticals, a triple bar, several combinations and distances that tested each pair’s navigational skill.

First to go double-clear was Anne Kursinksi of Frenchtown, New Jersey, aboard Caspar’s Lasino, owned by Market Street, Inc. They set the tone for the remaining field, clocking in at 38.269, which would ultimately earn them sixth place.

Irish equestrian Kevin Babington, now riding out of Gwynedd Valley, Pennsylvania, garnered the next clear jump-off round with Double O Seven 7. They passed the timers in 38.080, which would be enough to take home the final spot in the top five for fifth place.

Next of the top five to contest the shortened course were the victors, Chapot and Out of Ireland. They angled several verticals in the jump-off and executed a tight rollback from the triple bar to the second-to-last fence, where crucial seconds were shaved. They clocked in with a cool, clear 36.061 second round, which would remain unsurpassed.

A few more gallant trips were posted, but none came to close to Chapot’s time until Saugerties local Heather Caristo-Williams and Cosmopolitan 30, owned by Ralph Caristo, stepped in. They flew to the finish as the seconds ticked past, stopping the clock in 37.464, eventually settling them in fourth place.

Chapot followed with her second mount Umberto. They galloped through the course as the electric equestrian chased her own leading time, crossing the timers in 36.500, just fractions of a second shy behind herself and Out of Ireland.

Victoria Birdsall and Luxina, owned by Christina Fried, once again took home the third place title in the $10,000 Brook Ledge Open Welcome after sealing their name in that spot last week. They valiantly chased Chapot’s two leading times, turning and burning with every landing. They crossed the finish in a speedy 37.169.