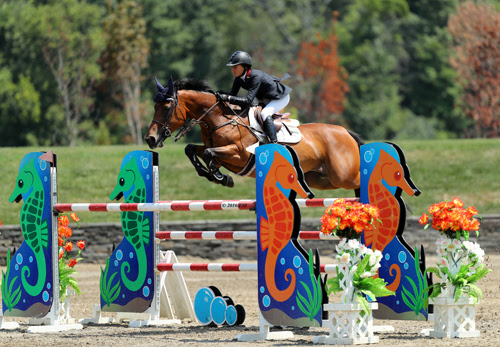 Saugerties, NY (July 30, 2016): Thirty-one riders and horses descended on the Grand Prix ring at HITS-on-the-Hudson for the fifth $25,000 SmartPak Grand Prix of the season. The order-of-go was stacked with talent, including the likes of Kevin Babington and Manuel Torres ,but Neshanic Station, New Jersey equestrian Laura Chapot once again swooped in to steal away with not only the victory, but with second and fourth place as well.

“I’m thrilled. All of my horses jumped beautifully today,” said Chapot of her mounts’ performances. “The course designer [Florencio Hernandez], built a really nice course for this class. I was surprised that there were as many clear as there were, but the track was great and I couldn’t be more pleased.”

Fifteen went clear to advance to the jump-off over the course set by Hernandez of Mexico City. The shortened course presented challenges that were sprinkled evenly throughout, with a mid-course combination, followed by an oxer to a final gallop to the final fence, and a few rollback turns.

First to go double-clear was Chapot and ISHD Dual Star, setting the tone for the remaining field of riders right out of the gate with a lightning-fast round in 40.602.

“I really put the pedal to the metal with her,” said Chapot of her round with ISHD Dual Star. “With the other two, I slowed down a bit and just tried to stay smooth.”

Colombian rider Manuel Torres, now riding out of Waterford, Virginia, and Christofolini H, owned by Andrea Torres Guerreiro, nabbed the next clear round of the shortened course. They went off at a quick pace, trying valiantly to catch Chapot’s leading time. They clocked in clear in 42.517, eventually landing them in third place.

Langley, British Columbia equestrian, Cassandra Kahle and Pyrenes De Louzes, owned by Fortune Equine, LLC., were the next pair to clock in clear. The crossed the timers in 47.286 for eighth. Kahle also took home seventh place with Wall Street, owned by Redfield Farm, stopping the clock in 46.270.

Chapot entered again with Quointreau Un Prince, a chestnut Selle Francais gelding she co-owns with McLain Ward. They powered through the course, crossing the finish in 42.594 for the ultimate fourth place prize.

The last spot in the top five would belong to Pablo Mejia and Reglisse Top. They finished clean in 43.482 for the pink ribbon. Sixth went to Paul O’Shea and Primo Calypso, co-owned with Michael Hayden, with a time of 44.469.

Chapot was second-to-last in the order with Thornhill Kate. The grey mare and powerhouse equestrian galloped valiantly through the course, clearing each fence with ease. They clocked in just behind Chapot’s own time aboard ISHD Dual Star with a time of 42.426, fractions ahead of Manuel Torres, for second place.