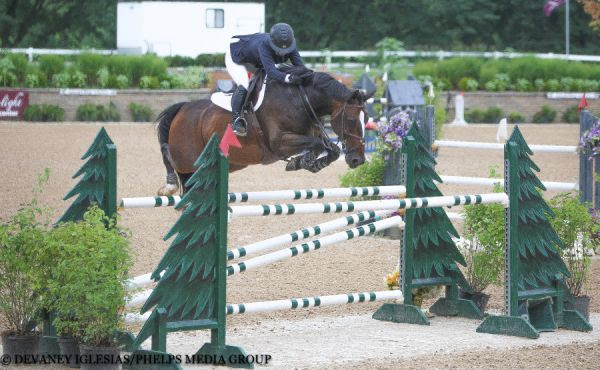 Kelsey Thatcher and Everything

Wayne, Ill. – July 29, 2016 – The country’s top athletes kicked off the Chicago Festival of the Horse Friday morning during the $25,000 Welcome Stake, sponsored by Saratoga Stalls. Only five athletes were able to navigate through the course without error to earn a trip to the jump-off, where Kelsey Thatcher and Everything had the quickest time to take home the victory.

Thatcher and Everything had a two-second margin over their contenders, clocking in a time of 34.314 seconds with a double-clear round to secure the blue ribbon and prize money.

Thatcher and the 12-year-old Belgium Warmblood have been working and training together for four years at Our Day Farm under the watchful eye of Maggie, Haley and Charlie Jayne.”Luckily, he’s a naturally fast horse,” Thatcher explained. “Everything is really fast, but sensitive and careful. It’s really about knowing when to let him go and when to hold him for a second.”

“He’s a baller,” Thatcher said, describing the speedy gelding. “I just go in and try to give him the best ride possible. I do what my trainers tell me. They’re watching the other horses and top times. We just followed the track they suggested. Everything normally shaves off two or three seconds from the top time.”

Locking in the second-place finish was Holly Shepherd and Skymiles with a time of 36.588 seconds. The 10-year-old Canadian Warmblood had never shown at the Lamplight Equestrian Center before, but had a double-clear round in the Catalina Cruz-designed course.

“This was actually the first time he’s shown at this horse show,” Shepherd said.  “I wasn’t sure if I should show or not, but he looked pretty friendly yesterday, so I was comfortable walking right in today. He jumped amazing. He’s been working on coming back since January, so we’re happy he’s doing well and hope he keeps rolling along.”

The Accolade Farm owner and trainer has had a busy show series, bouncing back and forth between the jumper and hunter arenas and seeing success in every class she enters. Shepherd is showing seven jumpers and five hunters and has already earned majority of the blue and red ribbons the show series has to offer.

“I show so many jumpers and so many hunters,” Shepherd explained. “Most the time it’s a lot of one or the other, but I happen to do a lot of both. It gets a bit crazy and exhausting, but I push through.”

The only other faultless jump-off round in the Welcome Stake went to Richard Cheska and his 10-year-old mount, Alonso du Monselet. The duo settled into third place with a time of 38.288 seconds to beat out Charlie Jayne and both his horses.

Jayne was one of seven riders that had two or more horses entered in the Grand Prix, however he was the only one to qualify more than one horse for the jump-off. Jayne earned fourth- and fifth-place finishes on Tou la Moon (42.478, 4 faults) and Caribe (47.859, 16 faults), respectively.

Many of these athletes will compete against one another again in the week’s featured event, the $50,000 Grand Prix (Saturday, July 30).

The Chicago Festival of the Horse also played host to the $5,000 USHJA National Hunter Derby sponsored by CWD on Friday, July 29, at the Lamplight Equestrian Center. It was 18-year old Taylor Johnson and Cavalli that bested the field of 22 riders to take home the blue ribbon.

“He’s amazing,” Johnson said of her horse Cavalli. “I’ve had him for almost seven years now and I know him really well at this point. He’s pretty much made, so he’s really good!”

Johnson and Cavalli earned themselves a score of 88 in the first over fences round, placing them in the top spot going into to the handy round. Johnson commented, “The first course was really good. There were a lot of single fences, and he was really good. It was awesome!”

While many riders have had years of experience at the Lamplight Equestrian center, this is Johnson’s first year showing there. She concluded, “I was here last year but I didn’t have a horse. I watched my brother last year, and I wanted to have a horse here. I have another hunter, so now that I have two horses here I really like it!”
For the handy round, Johnson was able to maintain her lead, navigating her way around the tight rollbacks and trot fence to clinch the blue. Johnson and Cavalli earned a score of 87 in the handy after tackling all four high options, bringing their total score to 175.

Johnson was given last minutes tips from trainer Catherine Rinehart before heading into the ring to put down a winning handy round. Johnson said, “Catherine just said, ‘If you see the inside turn after the trot jump then go for it,’ so I went for it. And she said, ‘Just have fun, that’s all you need to do.’ I’ve been with Catherine Rinehart for a long time, and she’s great!”

Holly Shepherd and HJ Noteworthy followed closely behind Johnson, earning a first round score of 84 with all four high options. Shepherd commented on HJ Noteworthy, saying, “He’s a Staccato bloodline, which is a pretty famous bloodline. He was imported from Argentina as a 3-year-old, and he’s getting ready to turn 5-years-old. He is probably the easiest horse I’ve ever taken to the ring. He’s super sweet!”

Shepherd’s impressive handy round earned a score of 88, securing her second place spot for the class with a total score of 172. She said, “I didn’t really have a plan for the handy. Since [HJ Noteworthy] is so young, I just wanted him to be comfortable and let him canter around and not ask him to do anything too hard. I was very excited about his finish. He’s pretty new at this, it’s only his third derby!”

Loretta Patterson owns HJ Noteworthy, and has been working with Shepherd for years to bring up new hunter and jumper horses. While Patterson owns the horses, Shepherd rides and competes with them, and has already earned countless ribbons as well as multiple championships during the first week at the Chicago Festival of the Horse.

Rounding out the top three in the $5,000 USHJA National Hunter Derby was Maggie Jayne riding Color Pearlz, owned by Holly Yeterian. Jayne and Color Pearlz earned a total score of 169 to clinch the spot in the top three.

Competition at the Chicago Festival of the Horse continues Saturday, July 30, beginning at 8:00 a.m.

Equifest I kicked off the 2016 Chicago Festival of the Horse, July 27-31. During the first week, audiences will be able to enjoy the $25,000 Welcome Stake on Thursday and $50,000 Grand Prix on Saturday, while the $5,000 National Hunter Derby will be available on Friday.

The second week of competition, Equifest II, will have several prominent events to watch, beginning with the $25,000 Welcome Stake on Thursday. Friday will be the second National Hunter Derby of the competition, and Saturday will feature the highly anticipated $75,000 Grand Prix. On Sunday the Hunter and Jumper divisions will partake in a $25,000 Derby.

Alberto Michan and Firewall are Fastest in MLSJ CSI5* Two-Phase