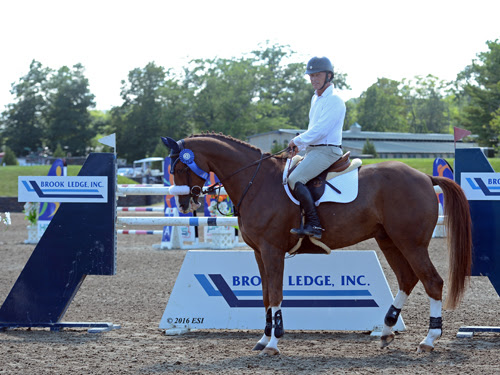 Saugerties, NY (August 5, 2016): Another week and another day of top-notch competition continued in Week VI at HITS-on-the-Hudson. Horses and riders gathered to contend for the blue ribbon in the $10,000 Brook Ledge Open Welcome to start off the week with a bang.

A talented field of thirty descended on the Grand Prix Stadium Wednesday afternoon to challenge the course set by Mark McGowan of Kilmarnock, Great Britain, with an immediate jump-off. The team to beat was Todd Minikus of Loxahatchee, Florida, and I Am Nala, owned by Two Swans Farm.

“This mare has been winning a lot at this level, so I was confident that she would do well. However the riders here are competitive, so you never know what the result will be,” said Minikus. “Classes like the Brook Ledge tend to be very fast, and going so early in the order and with so many clear behind me, I wasn’t sure if my time would hold up, so this was a nice win.”

Sixteen advanced to the jump-off with nine producing double-clear rounds in contingency for the win. First to jump clean over the shortened course was Minikus aboard another mount, Pegaso. They clocked in at 37.826 to set the Great American Time to Beat.

Anne Kursinski of Frenchtown, New Jersey, followed with Armado, owned by Miriam McClure-Adam. They edged out Minikus’ round, shaving a full second off as they crossed the timers in 36.549, which ultimately land them the fourth place prize.

East Windsor, Connecticut equestrian Christine McCrea had the next double-clear with Wannick WH. Their time of 38.142, while competitive, would not hold up to stay in the top five.

Minikus returned with the second of his five rides, and winning horse, I Am Nala. They powered through the course, clearing each fence with precision and ease. They would stop the clock at 33.999, raising the bar by more than three seconds where the lead would remain.

Cassandra Kahle of British Columbia was next on the good list for a shot at the jump-off. She piloted Adoctro, owned by Jordan MacPherson, through the finish at 35.030. They would take home the second place prize when the class was done.

Peter Wylde of Lake Worth, Florida, and Shakira Z, owned by Beachwood Stables, LLC., took home third place. They galloped through the shortened course, angling the mid-course Brook Ledge Vertical and executing a few exciting sharp turns. They flew to the finish as the clock wound down, passing the markers in 35.663.

Jonathan McCrea, also of East Windsor, and Wiranta Z, owned by Candy Tribble and Windsor Show Stables, Inc. had the next double-clear. They came in just under Kursinski’s time, stopping the clock at 36.938 for the final spot in the top five.

Molly Ashe and Kevin Babington also  made it into the jump-off. Ashe took home sixth with D’Arnita, owned by Louisburg Farm in 37.186, and Babington earned seventh place aboard Cariatide, owned by Cariatide, LLC., with a time of 37.774.

The final clear jump-off round belonged to Peter Wylde of Lake Worth, Florida, and Shakira Z, owned by Beachwood Stables, LLC. The galloped through the shortened course, angling the mid-course Brook