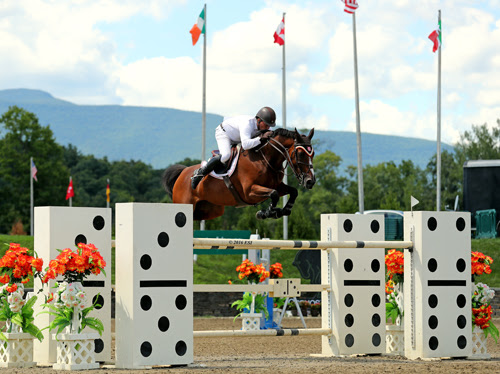 Saugerties, NY (August 8, 2016): As the curtain closed on the HITS Saugerties Summer Series, thirty-five horses and riders turned out for Sunday’s $75,000 UlcerGuard Grand Prix for a shot at the money. The field consisted of Olympians and world-cup finalists, in addition to talented juniors and amateurs, but only one could claim the top title.

Twelve advanced to the shortened course set by Mark McGowan of Kilmarnock, Great Britain, and four went fault-free in the jump-off in what would be a battle of the quickest. The team to emerge victorious was Todd Minikus of Loxahatchee, Florida, and his trusty 13-year-old Oldenburg Mare, Quality Girl.

“If there is such a thing as a ‘home ring’, this ring at HITS Saugerties would be it for Quality Girl, it’s a great ring,” said Minikus. “The faster she goes, the better she jumps — she’s just a pure winner and I’m lucky to have her. It really does ‘take a village to raise a child’ as they say, and all of this is made possible by a great group of sponsors, veterinarians and blacksmiths.”

The jump-off was set on a winding track, beginning with an oxer on a bending line to a vertical, then a left turn and a long gallop to a single oxer. The track then switched gears, requiring a tight, right turn to an adjacent oxer to bending line scenario. The home-stretch path was a double combination then a left bend to the final fence.

“The jumps were big enough for this class, and I think that after they adjusted the time allowed, that opened the door for a few more clear, which made for a good jump-off,” said Minikus of the course. “We went early in the jump-off and I knew that it was going to be quick, but Quality Girl is very fast, so I was confident our round would hold up.”

Leslie Burr Howard of Darien, Connecticut, was first to contest the shortened course with Quadam, owned by Laure Sudreau. They set the tone for the jump-off, clocking in clear at 42.244 to set the Great American Time to Beat. They would ultimately earn second place for their efforts. Howard would also earn fourth and fifth place with Moondoggie and Utah, owned by Burr Howard and the Utah Group, respectively.

Next to go clear in the jump-off were the victors, Quality Girl and Todd Minikus. They kicked it into high gear, angling fences and opening up to gallop the length of the ring. The stopped the clock in a lightning-fast 38.947, shaving an impressive four seconds off of Howard’s time to take the lead.

A few valiant trips went before the next clear round would be seen, including Peter Wylde’s ride aboard Aimee, owned by Aram Ampagoumain, LLC. They would cross the markers with four faults in 41.449, well enough for sixth.

Leslie Burr Howard re-entered with fourth-place mount Moondoggie. They gave the crowd the next clear round in 46.375.

East Windsor, Connecticut equestrian Christine McCrea immediately followed with another fault-free round piloting Nektarina B, owned by Candy Tribble and Windsor Show Stables. They came in at 45.958, not enough for the lead, but their clear round would ultimately earn them the third place prize.

The final entry to show, and the last pair with the chance to edge out Minikus for the win was Howard and Utah. They galloped through the course no holds barred, chasing the seconds on the clock for the potential win. An unfortunate rail in the mid-course combination would cost them the lead, but would be enough to claim the final spot in the top five.