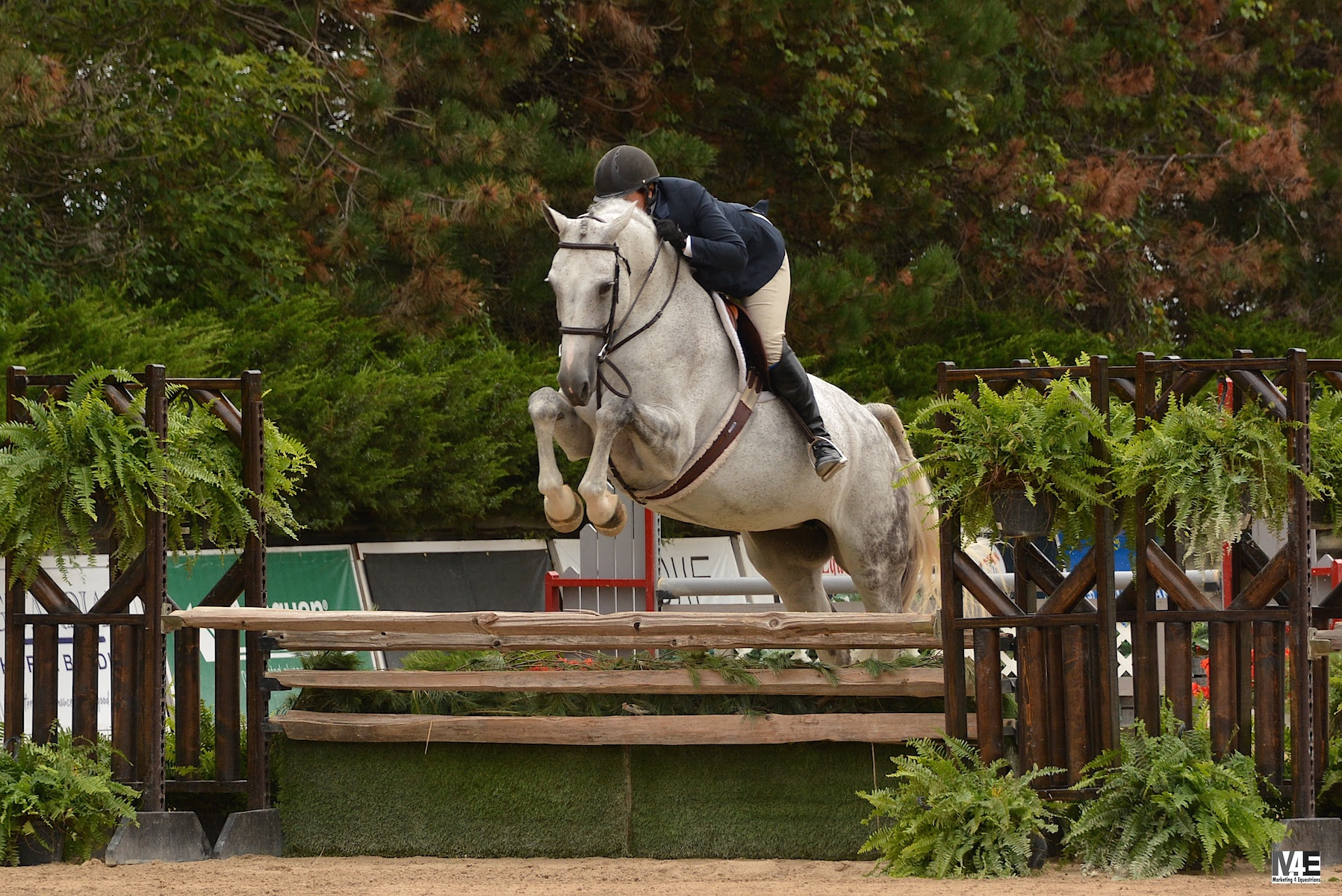 Show manager Patrick Boyle is known for his fantastic horse show productions and feature events, once again outdoing himself from beginning to end. Exhibitors and spectators arrived at the show to see a perfectly groomed arena with beautifully decorated derby jumps. The ring was lined with hundreds of matching evergreens, ferns and potted plants for the start of the Children’s Hunter section of the individual championships. Course designers Michael Puffer and Patrick Boyle created a track that gave riders options for turns in the handy round and allowed them to show off their horses’ gallop and balance. Three high option jumps allowed riders to gain bonus points to increase their scores.

After the under saddle, Bravo and Delaney Hoffman of South Elgin, Illinois, were at the top of the pack, followed by Molly Canfield and Penny Lane in second and Abigail Lefkowitz from Scarsdale, NY, and Valmont in the top three.

In the classic style derby round, Lindsey McDonald of Geneva, Illinois, and Prescott took the top position with Canfield and Penny Lane taking second again and Off The Menu and Kassandra Parker of Melbourne, Kentucky, in third.

Parker kicked it up a notch, returning for the handy round earning an 84 and an 88 plus 6 bonus points for the win. Haley Kane and Lincoln were second with Canfield again, placing in the top three.

Canfield’s consistent placings gave her and Penny Lane a grand total of 494 points for the USHJA Children’s Hunter North Region Individual gold medal. Off the Menu and Parker took the silver medal, earning 476.5 points and Bravo and Hoffman took home the bronze with 460 points.

Canfield and Penny Lane, the 14-year-old Oldenburg owned by Michelle Shapiro, was named Best Turned Out in the Children’s section, and groom Sergio Mendoza received a bucket of Shapley’s products and the Shapley’s Best Turned Out Award. The pair trains with Lorrie Canady at Galway Farm in Long Grove, Illinois. Canfield added she would love to return to compete at the championships again.

“I really liked the derby style format along with the under saddle, it gave you opportunity to show off your horse,” said Canfield of Chicago. “I loved the format of the weekend.  I’ve never been part of a team before so that was really fun.”

The adult riders took their turn with Donna Struve of Lake Bluff, Illinois and her mare, In Print, starting off their day with the win in the under saddle portion of the competition. Sophie Cohen from Greenwich, Connecticut and her Que Sera followed for second and Maria Kogen of Deerfield, Illinois and her True North wrapped up the top three.

Twelve jumps later, Struve and In Print held the lead while Kogen and True North bumped into second with Cohen and Que Sera moving to third after the judges panel broke a tie score.

Struve rode a beautiful and conservative round in the handy to earn scores of 84 and 86 plus six points for high options, giving her the win in all three sections and the gold medal.  Struve had never done a handy round before the championships but still managed to win with 524 points and a 14-point lead ahead of silver medal winner, Cohen and Que Sera with 510 points. Cohen rode a few tighter turns in her handy round earning her an 80 and 84 plus six high option points. Kogen and True North earned the bronze medal with 480 points.

“I could tell the judges really liked consistency so it was smarter to keep it smooth and consistent and just produce smooth rounds,” said Cohen regarding her handy strategy.

Kogen had the chance to compete in the Chicago Equestrian 2’6” Derby Series last year, earning the Leading Horse and Leading Adult Rider Awards. She fell in love with the derbies and was happy to have the chance to ride in a derby format class again.

“You learn a lot from the derbies and get to try different things you don’t normally get to try in the ring,” said Kogen. “The course was fantastic and the venue was great. It was really fun.”

“Some of us never get to ride in a handy round. It’s nice to have a chance to try a handy round and change things up from a regular hunter class,” added Struve.

The three top adult riders all agreed they would participate in the event again. They praised everyone that made it possible to have the spectacular event; Showplace Productions, USHJA and Danny Foster to name a few. They loved the footing and the beautiful venue along with their newfound friendships and cheering on their teammates in the jumper sections as well.

Jumper Teams
Course designer Danny Foster made an efficient and well thought out change to the track for the jumper team competition. His design made it tough for riders to go clean but not impossible or tricky to get around. The first round produced only four clear riders with only three riders double clean after both rounds.

Excitement grew as riders came back for the second round of the Nation’s Cup format, producing more clear rounds and fewer team faults. The scores were close up to the bitter end, forcing the Zone 5 Children’s Teams 1 and 2 to jump off to break the tie for the silver medal.

Chefs d’Equipe elected Hailey Royce and Rapidash to represent Team 1 in the jump off and Kristen Franz and Cypress for Team 2. Both had double clear rounds in the day’s competition. Franz rode to the challenge, earning a fast time and four faults to beat out Royce for the silver slot.

It was the zone 5 adult amateur jumper riders who stole the show taking the gold medal with a team total of only 16 faults. Members Jean McLaren and Lisa Baker were on the gold winning team in 2015. Both veterans put in a fault free second round. Christie Rugh-Bileddo and Megan Thomas completed the team.

The silver medal went to the Zone 5 Children’s Team 2 with 20 faults and the tie-breaking win thanks to Franz. Cassidy Rasch, Colby Kelly and Courtney Berlin rounded out the team.

“It was definitely a great course to test everyone, it was fair but had some challenges,” said Megan Thomas from the gold team.

“We’re really grateful to all the sponsors and organizers. It’s a big deal and a lot of work to put on this event and we’re grateful to Showplace Productions and Diane Carney, Pat (Boyle) and everyone that makes it happen,” added second time gold team member Jean McLaren.

“It’s a great program and people should keep talking about it and encourage other riders to attend,” said gold medalist Lisa Baker.

Jumper riders will compete in the fourth and final round of the USHJA Children’s and Adult Amateur Individual Jumper Championships on Sunday with Kristen Franz currently in the lead for the individual gold medal.

All the action can be watched live with commentary by Diane Carney atwww.starcreeklive.com.

To learn more about the Children’s and Adult Amateur Hunter and Jumper Championships, visit www.ushja.org.