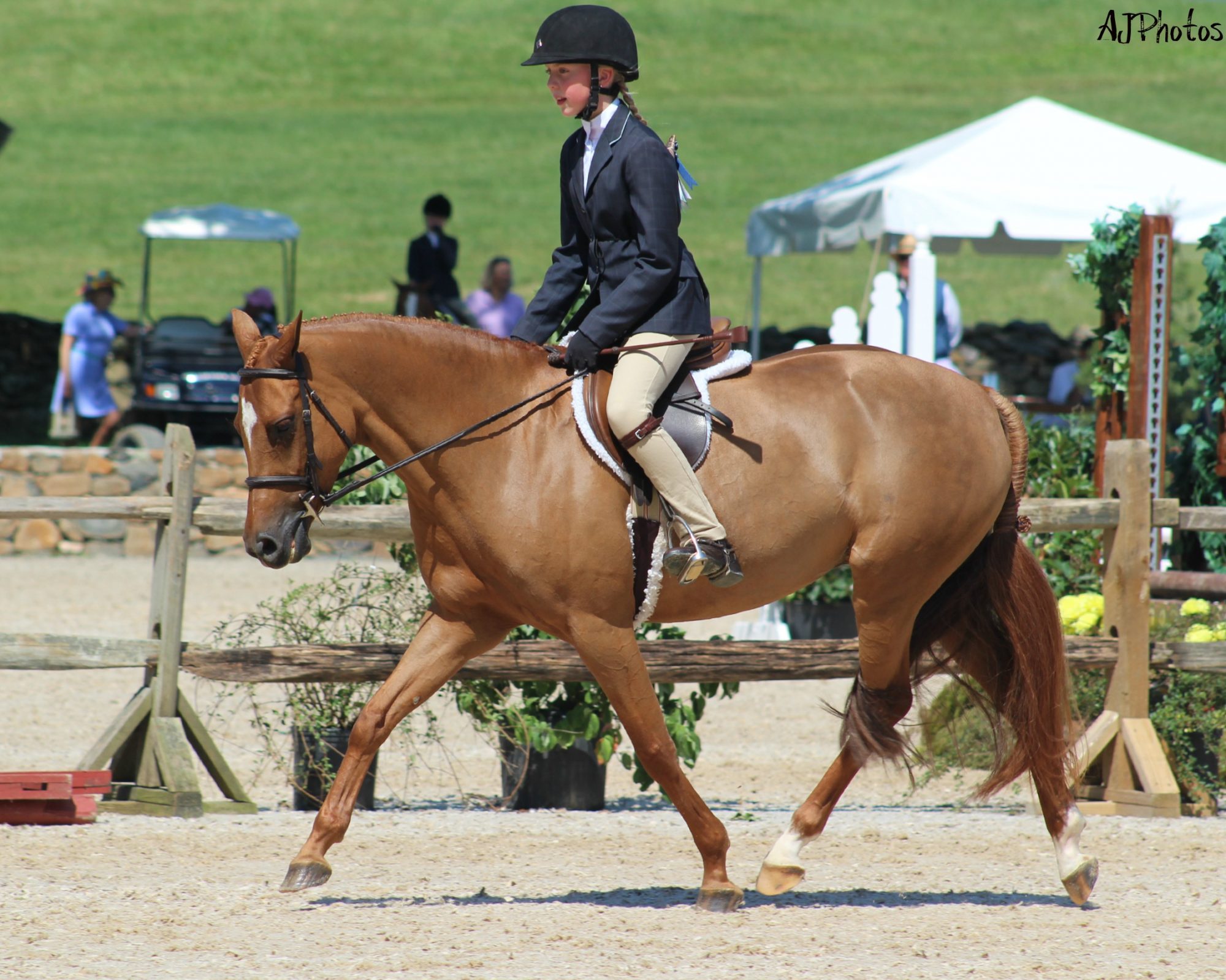 In the Spring of 2007, Debra Meighan of Leesburg, VA, had a decision to make.  She owned a Hanoverian/TB cross mare which she had bought as a project for herself, and she also had a young daughter who showed a growing interest in riding.  What to do?  In the back of her mind Debra had always thought that she might breed the 15.1 hand mare to a pony stallion, and now was the time!

The following is VPBA Director Lisa Hammerschmidt’s interview with Debra about her plan and how it has progressed and come to fruition.

Q: Tell me about the mare and how you decided to breed her.

A: Clementine was really a project for me to ride and train.  A lovely chestnut and a beautiful mover, she was 5 years old when I bought her.  Her sire Wayfarer had sired many successful hunters, and when my daughter Nicki started riding, I thought that breeding our own pony would turn into a great project for the two of us.

Q: Why did you choose Gypsy Time Traveler as the sire-to-be?

A: I chose Gypsy Time Traveler, or “Little Man” as we call him, for a number of reasons.  Most importantly, he was sired by Prime Time who was the sire of Nicki’s medium pony whom we adored for his amazing brain, athletic ability and bravery.  “Little Man” is a small pony – which I needed because I knew that Clementine had larger horse genes in her background.  While he was relatively unknown when I bred to him, he has proven a wise choice.  His babies have been very successful in the pony ring, starting with Miss Bermuda who was 3rd nationally in her green year, and continuing with two others showing successfully in the medium green division in 2015.

Q: Now tell a little about the resulting foal.

A: Well, she’s a chestnut filly whose barn name is Peach.  That fit with her coloring, and it seemed natural with a mother named Clementine.  Since her birth in 2008, Peach has always been handled a lot, so she loves attention and people and carrots and apples!  She is a very dainty eater and takes her time using lots of tiny bites.  Overall, I think she is a bit of a princess – which is a good thing for a show pony.

Q: What about her early training?

A: Nicki and I raised and trained Peach together, and it made us very close.  We started her fairly early, getting her used to a bridle as a yearling and introducing a saddle when she was two.  We backed her in the fall of her second year, then turned her out for the winter and got her really going as a three year old.  We did a lot of flat work and cavalletti poles that year and began crossrails in the fall.  She was really easy to start because she is so smart and wants to be a good girl.  By the time Peach was four, we had taken her off the farm several times and had gone to a few local horse shows.  At her first show she did the Pony Pleasure division and handled herself very well at a venue that isn’t always easy for babies. Longtime member Dale Crittenberger is a strong supporter of the Virginia Pony Breeders Association’s programs.  He has stated that the progression of opportunities offered (In-hand classes, Young Pony Under Saddle classes, and the 4 class Registered Virginia Bred Performance Division) is the perfect way to start a successful hunter show pony.

Q: How did Dale become involved?

A: Since 2012 Nicki had been training at Woodhall Farm with Dale and his partner, Peter Foley, so I mentioned to Dale that I had a promising young pony to finish and sell.  After his evaluation of Peach, he agreed to help me.  As we saw her progressing, Dale and I began our partnership.

Q: When did you start to think that she was special?

A: Dale has trained and shown national champions, so the fact that he was interested in Peach meant that she was indeed special.  Once the Woodhall team of Peter Foley, Amy Zettler and our predominant rider, Jordan Toering, were in place, the pony’s training and ability really began to shine through.  I think that the VPBA Performance Division at the 2014 Warrenton Pony Show was a breakout moment for Peach.  We were in some excellent company that day, and it was a fairly large division.  She had won the Model and both Over Fences classes, and when she was announced as the winner of the Under Saddle as well, I was so full of emotion and so proud!  Peach went on to be the High Score VPBA Performance Champion for 2014.  I went to the VPBA Awards Banquet where, in a room full of respected pony experts, I received the Championship ribbon, an embroidered scrim sheet, and a monetary check courtesy of the Grant awarded to VPBA by the Virginia Horse Industry Board’s “Virginia Bred” program.  I am eternally grateful to Dale; not only did he see something special in our pony but he helped us achieve more than I ever thought possible.  He is the best partner I could ever ask for, and I am so blessed to call him one of my good friends.

Q: What are your hopes for Peach?

A: My biggest hope for Peach is that she gets a child who adores her.  She is one of those mares who will go to the end of the earth for you.  She loves horse shows – I expect she will have a long career in the pony ring teaching kids the ropes.  When you bring babies along, you want to see them go on to jobs that they love and have owners who love them – and that’s what I want for my Peach.

Editor’s Note:  As of this interview, Gap Springs Heart’s Desire was the leading Medium Green Pony Hunter in both the USEF National standings and the VHSA standings. Addison Slye and Our Song: How This Small Pony Has ‘Given...