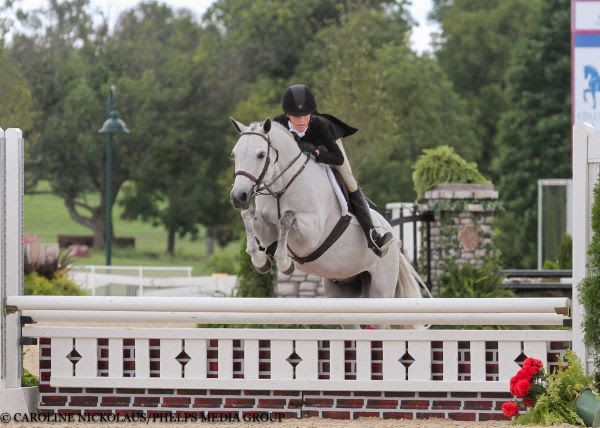 Lexington, Ky. – August 13, 2016 – A little on-again, off-again sprinkling of rain at the Kentucky Horse Park did not interfere with Natalie Jayne’s impressive ride on Woodlands Stevie Ray in the Medium Pony Hunter division at this year’s U.S. Pony Finals.

Saturday’s over-fences section saw 167 of the best medium ponies in the country jump around the Walnut Arena, but it was Jayne and “Stevie” who walked away with the blue ribbon. In the under-saddle phase, the pair came in 21st out of a large class. Stevie is owned by Hannah Bernstein.

The 12-year-old rider from Elgin, Illinois trains with her mother, Lynn Jayne, at their Our Day Farm. She is also trained by Patricia Griffith of Heritage Farm and Kristen Carollo of Courtyard Farm.

While warming up, Jayne’s trainers emphasized getting Stevie moving forward off of her leg before beginning the course. Jayne got the catch ride on Stevie when his current leaser, Emily Aitken, had to decide between him or her other medium pony, Cleverist. Aitken chose the latter, and that meant that Jayne only had a short amount of time to figure out how to ride the 12-year-old gelding, who was also champion last year at U.S. Pony Finals in the same division with Alexa Aureliano. Luckily, the pair clicked right away.

“He rides a lot like a horse. He’s my kind of ride,” Jayne acknowledged. “I practiced a lot this week and jumped around the course, but he’s pretty easy to get used to.”

Perhaps some of Jayne’s innate talent in riding comes from her passion for all animals, especially horses and ponies. This affinity began at a very young age.

“I’ve always liked being around animals, so it’s nice to be able to interact with them,” she said. “I started riding since I was born, basically. I’d stand on the pommel of the saddle and my mom would walk around and cool out her horses. So I’ve been riding forever.”

“They said just to make sure I got him going before the first jump – he’s lazy. And, to make sure he didn’t swap off to the right lead,” Jayne said.

Natalie’s mother, Lynn said that her calm disposition that can easily adjust to different types of ponies is what sets her apart from the rest.

“She’s very easy going and nothing really gets to her,” noted Lynn. “Last year, when she was in the Pony Medal, that was a catch ride who she’d never ridden before. She is just one with the horse and it’s easy for her to adapt.”

Natalie has also accumulated many top wins on horses recently. In addition to her Small Junior Hunter, Outlook, with whom she most recently won a class at Junior Hunter Finals, she also has a jumper. She is looking forward to showing at Pessoa Medal Finals and ASPCA Maclay Regionals in the fall.

The Woodlands Pony Farm’s Kay Randoph was elated when she found out that the pony she had bred ended up in the winner’s circle at U.S. Pony Finals for the second year in a row. The farm is located in Brodnax, Virginia.

“I’m super proud of him and I’m so happy to come out and see him all braided up,” she said, beaming.

“We have a big farm and they’re all pretty much just born in a paddock. They live a good life. Then, when their attitude is good we’ll get them ready. We try to get them at least green broke,” Randoph said.

Stevie is a Welsh Pony cross by Woodlands Velvet Rain, out of Woodlands Fire-n-Ice. The ponies that Randoph has bred over the years are all special, and usually she finds out that most of the ponies she has raised and sold have qualified for U.S. Pony Finals.

“I think on average we would have like 16 to 18 ponies that will qualify each year,” said Randoph. “They can be any age, from five year olds on up… We’ve had some come here in their 20s.”

Capturing the reserve championship prize was Hunter Champey and Annabelle Sanchez’s News Flash. Together, they were thirteenth over-fences and second in the hack. During Thursday’s model phase, the judges gave News Flash a tenth place ribbon in a large crowd of ponies.

“I just kept calm and rode. My day was going great; I knew I just had to go in and keep a nice, easy canter,” Champey said.

“My twin sister rode News Flash last year, and we just switched this year,” Champey stated. “The owner keeps texting my older sister asking about the pony. He’s just a great pony. His owner is going to be very excited, I already know.”

Doloff and Dasher, as he’s called, turned in an eight-fault round to start off the night, creating a three-way tie for the lead with Isabella Durnell and Carlton Diva, and Maya Lovdal and Miracles Happen.

“In the first round, I got a little bit forward at the combination, and he got flat,” Doloff said. “I had the back rails down. I surprisingly felt less pressure when I did that – I’m not sure why, but I felt better after that.”

As the night continued, nobody was able to break the tie for the lead, so the top three riders from round one returned for a jump-off to settle the score.

Durnell and Carlton Diva returned first and went clear to set the early time to beat at 35.775 seconds. Lovdal and Miracles Happen were next to attempt the short course, and lowered two heights to finish on a time of 36.244 seconds.

Doloff was last to take the stage, entering the ring confidently with Dasher to take over the lead, going clear in a time of 33.327 seconds. Lovdal finished with the bronze medal, and Durnell with the silver medal.

“Dasher is naturally quicker than most ponies,” Doloff said. “Even when I’m not really pushing, he has a faster step, so I knew that I didn’t have to take any crazy gambles, because I knew that he would be fine. I knew I still had to keep the rails up, so I just tried to nail each fence as quickly as I could without losing my mind like I did last year.”

After Doloff unfortunately went off course during his first Pony Finals last year, he said that coming back this year and winning feels incredible.

“This is a fantastic comeback, and I just think that this was great, because after last year I was really down,” Doloff explained. “I was making a lot of mistakes, and I was going off course, and I was at my lowest point. I went to Capital Challenge, and I was in the lead, ready to win, and then I completely blew it in the jump-off.”

After his trainer, Dorna Taintor, recommended that Doloff read up on sports psychology, Doloff said his luck began to change as he learned how to relax and change his perspective going into the ring,

“I just worked on putting everything in perspective,” Doloff continued. “At the end of the day, it’s just a show. Whatever happens, happens, and there’s going to be more shows in the future. It’s about preparing for the next one.”

Doloff said he began leasing Dasher three years ago, and only planned to lease the talented pony for one year to compete in pony racing. However, as Doloff discovered the pony’s scope over fences, the plans changed, and the duo began training to compete in the Pony Jumpers with the goal of competing at Pony Finals.

“The first year was just getting to know each other, and we realized he could jump big but he wasn’t really in a program, so we were just galloping around,” Doloff said. “We’d go to a race one week and then go to a horse show, which was a bit counterproductive.

“I think the turning point was in my second year with him. We went to Devon Fall Classic in 2014, and I didn’t really know what a formal show was. I had to borrow a man’s tweed jacket and tie, and I’m wearing too-small pants, and I have a blue saddle pad. It was the most ridiculous thing ever. We got second, and it was the first time we did 1.05m, and he did fantastic. I think it was when we finally got real clothes.”

The 2016 U.S. Pony Finals will wrap up on Sunday with the Pony Medal.

What: The 2016 Kentucky Summer Horse Shows series includes two weeks of top hunter/jumper competitions during the months of July and August. The Kentucky Horse Shows series is the host of the Hagyard Challenge Series and the Hallway Feeds USHJA National Hunter Derby series.

Approximately four miles away from the horse show, discover the place where elegant comfort in an ideal location meets excellent service and affordability. At the Clarion Hotel Lexington, you’ll find well-appointed accommodations with options of two double bed, two queen bed, king rooms or suites and exceptional amenities such as our free hot breakfast buffet. Home of the Kentucky Horse Park, the Lexington Convention Center, University of Kentucky and the Kentucky Bourbon Trail – our Lexington hotel is on Newtown Pike at Exit 115 on I-75, close to all the big attractions, and is the perfect place to stay whether you’re here to get down to business or have some fun. Best of all, bring your furry friends for any trip because the Clarion Hotel in Lexington is also pet-friendly.

Campground reservations: Reservations may not be made through the horse show office. To reserve a campsite at the Kentucky Horse Park for any of the horse shows, please call the Campground Store at 800-370-6416 or 859-259-4157, or email Ryan McGaughey at ryan.mcgaughey@ky.gov. Be specific as to the show name and the dates you wish to stay. Check-in time is 2 p.m. and checkout is noon. You must make arrangements with the Campground Store if you plan to arrive earlier than 2 p.m. or stay later than noon. Vehicles that are not removed from a campsite by checkout time will be towed.