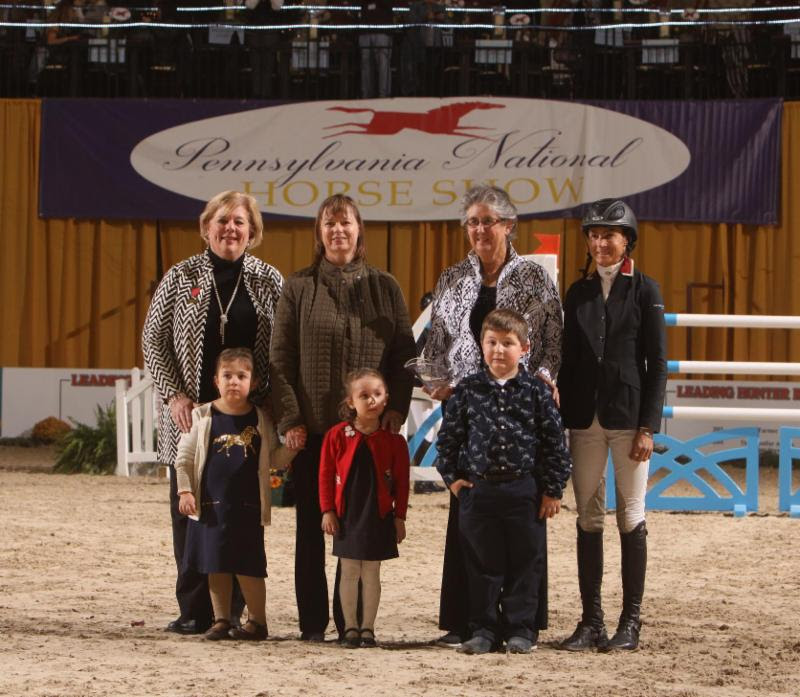 Harrisburg, Pennsylvania – October 27, 2016 – The Pennsylvania National Horse Show (PNHS) presented by The Lindsay Maxwell Charitable Fund, one of the largest and most prestigious horse shows in the nation, inducted both Mary Mairs Chapot and Harry Gill into the PNHS Hall of Fame. The award ceremony was held prior to the $100,000 Prix de Penn National Grand Prix Presented by The Lindsay Maxwell Charitable Fund at the 71st annual horse show on October 22 at the Farm Show Arena in Harrisburg, PA.

Mary Mairs Chapot has been a trailblazer on the American horse show scene since her earliest days as a student of Jimmy Williams and her career history is riddled with ‘firsts.’ She was the first West Coast rider to win the AHSA Medal and ASPCA Maclay Championship at the age of 16, the youngest woman rider on a U.S. Equestrian Team and the first woman to win a Pan American Games Gold medal. She and Kathy Kusner became the first women to ride on a U.S. Olympic Show Jumping Team at the 1964 Olympic Games in Tokyo. In 1965 she married her teammate Frank Chapot and the pair became the first husband-wife combination to ride for the U.S. Equestrian Team (USET).

In 1965 Chapot won the Cleveland Grand Prix, the first American Grand Prix event. She rode on 22 winning Nations Cup Teams with many victories both stateside and abroad. From 1962 through 1967, she won a number of big classes at the PNHS, including the Prix De Penn National in 1967 on the horse “Anakonda.” She remains one of the few equestrians to both win and later judge the USEF Hunt Seat Medal at the PNHS. Her late husband, Frank, was inducted into the PNHS Hall of Fame in 2013.  Mary and Frank were both also inducted into the Show Jumping Hall of Fame (Mary in 1992 and Frank in 1994).

A lifelong horseman, Harry Rittenhouse Gill was instrumental to many aspects of equestrian sport and a major force in the world of Grand Prix show jumping for many years. He had an eye for discovering new horse prospects and owned many of the nation’s most famed horses. His slew of champions included the legendary Idle Dice, Twist du Valon, Victor, Bean Bag, Sloopy, Nanticoke, Philco and Number One Spy to name but a few.

One of the sport’s foremost authorities on footing, Gill served the industry by improving horse show venues and riding conditions and served as a member of several Boards of Directors including Stadium Jumping, Inc., the American Grandprix Association and the Devon Horse Show. Gill played an enormous role as a member of the Organizing Committee for the 1981 World Cup Final held in Baltimore, helping to bring the Final to the U.S. for the first time. He was also a member of the Organizing Committee for the Baltimore Jumping Classic, Devon Horse Show and the American Gold Cup, which he helped out of its financial troubles and then helped establish it as one of the sport’s premier events.  In 2002 Gill was inducted into the Show Jumping Hall of Fame.

“We are delighted to honor such instrumental equestrians in our sport,” said Susie Webb, PNHS Executive Director. “Induction into the Hall of Fame is in recognition of their extraordinary efforts, commitment and dedication to excellence in horse showing and to the Pennsylvania National Horse Show. We congratulate them and their families.”

For more information on the show or sponsorship opportunities, visitwww.PaNational.org or call (717)770-0222