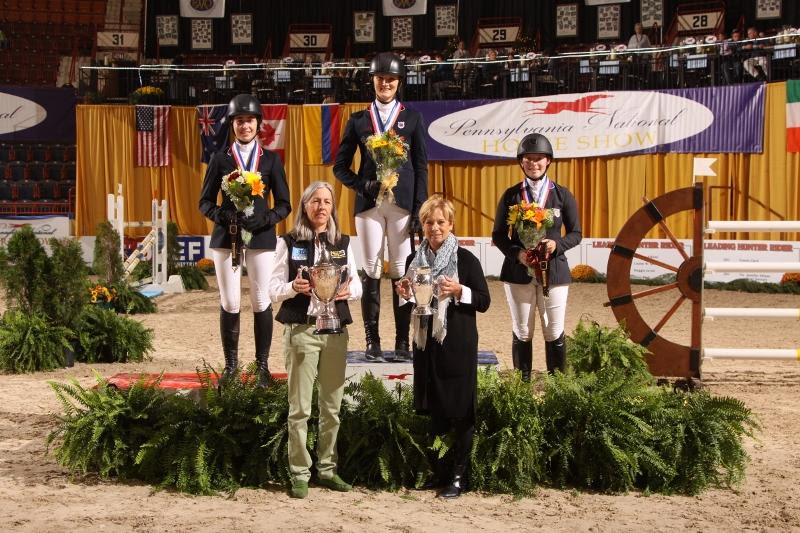 Harrisburg, PA – October 15, 2015 – In a nail biting fight to the finish, Katherine Strauss, 17, of Southampton, NY, took top honors riding All In, owned by Katherine Strauss, LLC, in the Neue Schule/USEF Junior Jumper Individual Championship at the Pennsylvania National Horse Show, presented by The Lindsay Maxwell Charitable Fund. The win was all the more special as she was competing in her final year as a junior rider.

“I couldn’t have been happier with the way my horse jumped this week, I am so proud of him. This is my third year competing with him here and it feels great to finally come back and have this finish,” said Strauss. “This has been a class that I have watched for many years and to represent Zone 2 and compete with riders that have worked so hard to get here all year is so special. I’m even more thrilled to have this win with my teammates and my barn mate. It’s a true testament to how strong the Zone 2 riders are.”

In the final phase of the Championship, scores are carried over from the previous two phases. The top three, Strauss, Goetzmann and Fischer, all entered the final phase of the competition without having knocked down a single rail. The margin between them was one and one half faults, meaning there was no room for error in order to capture gold.

Riding in reverse order of merit, Fischer was the first of the three to ride. Fischer and her mare, Tosca du Feugre, were easily negotiating the Steve Stephens-designed course until the final fence, where they came in at an awkward distance and the mare made a herculean effort to leave the rails intact.

“I didn’t see anything,” said Fischer about the distance at the final fence. “I was like, it’s the last jump, I can’t have it down and I panicked, but I knew she had my back. I said, ‘Come on Tessa!’ And she cleared it. She’s a good girl. She had my back.

In the beginning she really didn’t like me very much. It took me actually 12 months to figure out how to ride her so it makes this moment more special.”

Goetzmann followed Fischer riding on Wrigley. Fischer had already gone clear and Strauss was waiting in the wings, so the pressure was on. The young rider had no problem going clear and clinched silver.

“It’s such an amazing accomplishment,” said Goetzmann. “My horse, Wrigley and I continue to grow and grow. I’ve had her for about two years now and each show our partnership gets better and better. It’s an amazing feeling having both of my teammates finish well. No matter what the end result was, I was going to be happy.”

As the final rider of the 18 who competed in the final phase, Strauss had a long wait before entering the arena. Her teammates had already gone clear, so she and All In needed to be flawless to win gold.

“These two definitely put the pressure on, they are so hardworking, so talented and so accomplished,” said Strauss.  “I was definitely nervous, but I had total confidence in my horse. He’s such a special horse.”

Strauss also won the William C. Steinkraus Style of Riding Award, sponsored by Karen Healey Stables. The award is presented to the Prix des States Junior Jumper Rider who best exemplifies the American style of equitation and the respectful, dignified, courteous and workmanlike manner of a true sportsman.