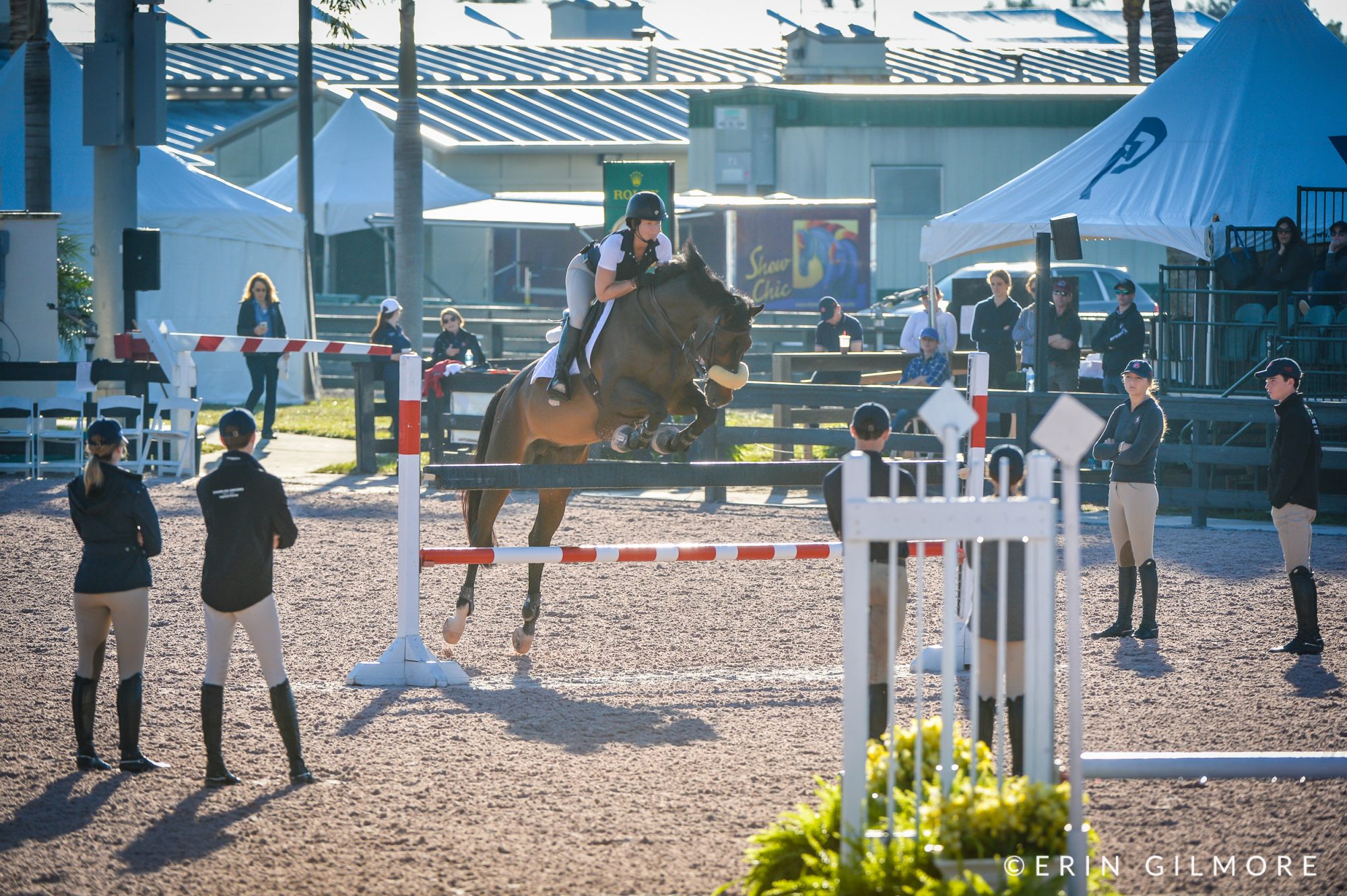 On Day 2 of the 2017 GHM Horsemastership Session in Wellington, Florida, Beezie Madden picked up where Anne Kursinski left off on the fundamentals of correct and forward flatwork—and applied them to the foundation of jumping over fences. Read about Kursinski’s flatwork session on Day One here .

Beezie led the group of 12 young riders through a successive series of gymnastic exercises, and in a morning demonstration, displayed the many benefits of riding gymnastics. “I could make a whole day out of these rails on the ground,” Beezie said as she rode her horse Breitling over three
poles, set 45 feet apart each. She cantered three to three strides, three to four, three to six, added a trot transition and half pass at the end, and looped back to canter back down the rails in the opposite direction.

That simple but essential adjustability would be repeated throughout the day as Beezie asked riders to canter and then walk the poles, trot and then halt, and change strides in both directions. It was a preview of what was to come over fences.

The addition of three, 2’ verticals on a curve kept horses focused on the next question, and altogether served as a well thought out building blocks to the gymnastics that came next.

“You’ve got to keep it simple if you’re trying to train the horse,” Beezie said. “I want you to be able to work off your eye, and do what’s best for your horse.”

All 12 riders served as jump crew for Beezie and each other throughout the day. Held in the Global Dressage Festival’s main arena under Florida sunshine, the event, which is free for all to attend, drew a group of dedicated spectators for the second straight day.

The water jump and liverpools loomed large in the day’s exercise. Ensuring that the United States’ young riders are exposed to and know how to handle the open water is a cornerstone of George Morris’ horsemastership philosophy, and that showed in Friday’s exercises. Four variations of liverpools, tarps and open water jumps dotted the arena, and all were well used.

“You are getting to the point where we’re not training you as much, but you’ve got to start training the horse more,” Beezie said. “Get what you want from the horse.” As Beezie increased the difficulty of the gymnastics course by putting each separate element together, she emphasized accuracy through the basics that riders had warmed up with at the walk, and responsiveness was key.

“When you take more contact, their reaction should not be to burst forward, and it should not be to get behind the contact,” she said. “It should be a progression not starting with a lot of demand, but with enough reaction to go forward.”

The horses, some borrowed, that the riders are using for the week varied from dull to the leg to overly hot, and Beezie took the time to address each question. TJ O’Mara’s mount, a 9-year-old mare named Queen Jane, started out dull to the leg, and she preached consistency: “It’s unfair to the horse to sometimes train the spur, and sometimes not train it. Be conscious of your leg, and if they’re not attentive to that, it’s all about a progression of aids.”

When Coco Fath’s horse Bart C wanted to spook, she emphasized that it wasn’t the spook that was important, but rather, the fact that he was moving off the leg when asked, and riding through the spook.

Each rider may have ridden the same course of two separate gymnastic lines, that riders completed in both directions and two kinds of water obstacles, but for every individual, Beezie made adjustments to fit each strength and weakness, helping all the participants end the day on their own positive note.