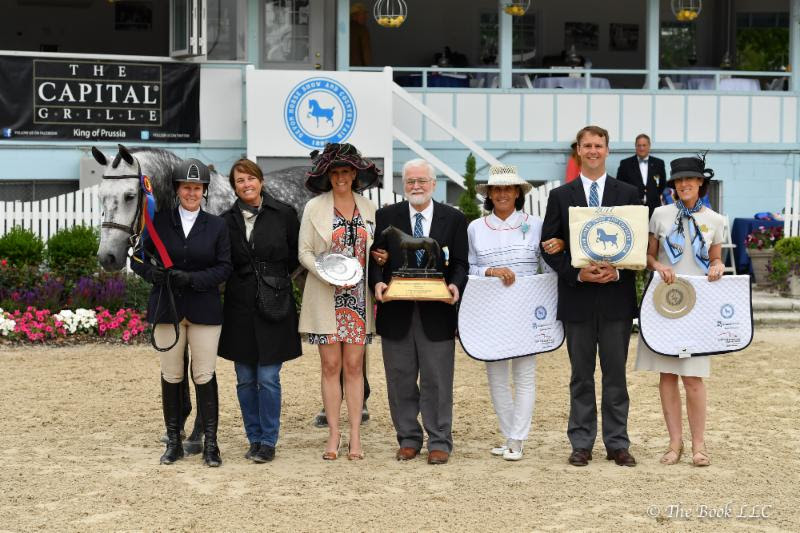 Devon, PA – May 30, 2017 – The famed Devon Horse Show is known for being the place “where champions meet,” and on Tuesday afternoon three more horse and rider pairs walked away from the prestigious Dixon Oval wearing the championship tricolor ribbon.

Louise Serio guided Kings Landing, owned by Meralex Farm, Inc., to the prize in the Green 3’6″ Hunter division, sponsored by Dr. Betsee Parker and Huntland. The Kennett Square, Pennsylvania, native had a short trip to make to the historic Devon Horse Show grounds, but made it worth her while even so, claiming the James J. Piehler Memorial Challenge Trophy on Tuesday.

The 7-year-old Hanoverian gelding finished in the second place position in the stake round with a score of 88.5 on Tuesday and took home two blues over fences with notable scores of 89 and 92 on Monday.

Coming off of a high note from their most recent show, the Old Salem Farm Spring Horse Show, Serio was excited to capture more ribbons to add to her collection for her Derbydown Stables team. Serio recently began working with Kings Landing since purchasing him from an auction in Germany as a 2-year-old and importing him two years later. She is looking forward to seeing what the future holds with the special young horse and solidifying their partnership.

Behind Serio was reserve champion Daniel Geitner and Walk the Moon, owned by Lynn Seithel. Geitner secured first place honors in the stake round after judges awarded them a score of 89 on Tuesday as well as two third place ribbons for earning scores of 87.5 and 88 over fences.

In the Green Conformation Hunter division, Scott Stewart and Betsee Parker’s Private Life took home the championship and the Just For Fun – Two For One Challenge Trophy, while reserve champion honors were given to Maggie Jayne and Pony Lane Farm’s Standing Ovation.

The Green 3’9″ Hunter division saw Sandy Ferrell and Because, recently purchased by amateur rider Aizlynn Radwanski, rise to the occasion. The pair continued their lead from Monday and received scores of 88 in the stake and handy rounds to earn a first and second place before being named champion and receiving the Third Rowland and Helen Comly Challenge Trophy. Radwanski is eager to show Because later this week in the Amateur-Owner Hunters, and is confident that her new partner is ready thanks to Ferrell’s help.

On Kings Landing:
“[Kings Landing] felt awesome this week. He went great both days. He was a little green in the handy round today, but he really rose to the occasion. He felt wonderful and is a fantastic horse.”

On how she acquired Kings Landing:
“We bought him as a 2-year-old out of an auction in Germany. He came over to America as a 4-year-old and has really been enjoying himself since then. We didn’t really start with him until he was 5, and he is 7 now.”