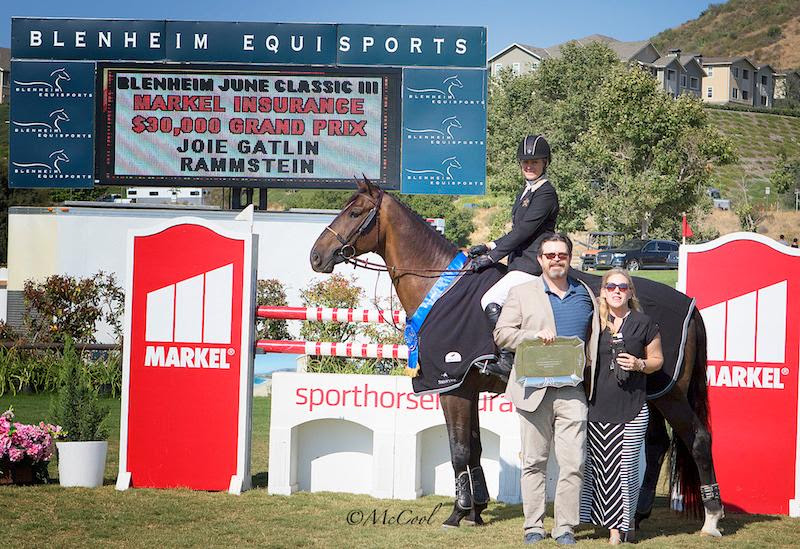 San Juan Capistrano, CA – June 25, 2017 – Joie Gatlin and Rammstein secured a first place finish in the $30,000 Markel Insurance Grand Prix after a blazing jump-off, where she daringly left strides out and all the fences up. Thirteen of thirty entries advanced to the jump-off, and of the four double-clear efforts, Gatlin’s 36.12 time was the fastest.Course designer Ivan Tagle of Argentina built a 1.40m track that included both a triple and a double combination and required riders to make adjustments and plan their tracks carefully. Gatlin showcased her talent and precision as she guided Rocking Basilisk Farm, LLC’s nine-year-old Rammstein through both phases promptly and accurately.  John Pearce and Chantico nipped at their heels, coming in a close second, double-clean in 36.51, less than half a second slower.

Gatlin spoke highly of the mount she’s been developing this year. “I’ve been working on his speed and moving up and doing some of the other grand prix classes at the 1.45-1.50m height,” she explained. “He’s been very, very consistent. Today with so many clean I thought, ‘Wow, I’m really going to have to go for it,’ and he was right there with me. I left out strides everywhere – he’s got such a rangy stride.”

The duo plans to continue competing at the grand prix level throughout the year and have their eyes on the prize for the Markel Insurance Grand Prix Series Final at The Las Vegas National Horse Show in November.