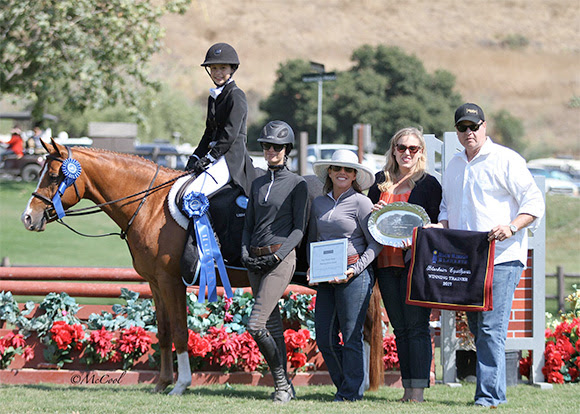 San Juan Capistrano, CA – June 28, 2017 – Sienna Gustafson rode her large chestnut pony Imagine That to victory in the USHJA Pony Hunter Derby at the Blenheim June Classic III, leading a field of twenty-nine entries with a two-round total of 165.5.

Gustafson, Imagine That, and their team had a standout day: she received a Blenheim EquiSports embroidered cooler, an engraved pewter plate, and a pair of Roeckl Sports gloves for her win. Imagine That was awarded an additional blue ribbon as the highest placing large pony. Heatherly Davis won the  Blue Ribbon Blankets Winning Trainer Award and Herman Tiul received the EquiFit Groom’s Award for Best Turned Out Pony for his work with the chestnut. Gustafson walked away with the Balmoral Winning Owner Award.

Just seven years old, Imagine That has been paired with Gustafson since January 2016. Since then they’ve come a long way and have plans to venture east to Pony Finals next year. This USHJA Pony Hunter Derby was their first. “It was a great experience and I was really proud of him,” Gustafson said.

Just one small pony made the top twelve to advance to the Handy Round, and it was Buzzworthy, owned by Enchantment Farm, LLC and ridden by Shiloh Roseboom. Roseboom and Buzzworthy’s two round total of 154 landed them fourth place overall, but they were recognized as the highest placing small pony entry. Augusta Iwasaki and Isabella Griffin’s Happily Ever After picked up third place overall and stood out as the highest placing medium pony entry. Gabrielle Sokolow piloted Ava Peck’s Kingston to a score of 85 in the Handy to secure The Plaid Horse Winning Handy Round Award and her own ‘Stanley’ stuffed pony. Sokolow and Kingston finished second overall, just half a point behind Gustafson and Imagine That.