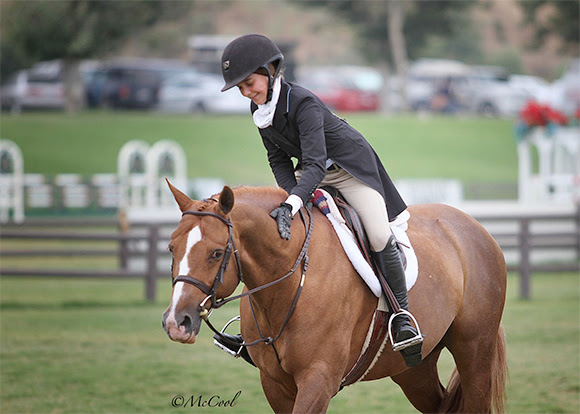 San Juan Capistrano, CA – July 1, 2017 – The fourth and final USHJA Pony Hunter Derby of the season was a special one, with a Markel Insurance sponsorship, $5,000 in prize money, and Makoto Farm Circuit Awards presented to top ponies from the derby season. In today’s derby it was Gabrielle Sokolow and Kingston who topped the field, earning high scores of 84 and 86.

For her win, Sokolow walked away with a Blenheim EquiSports embroidered cooler, a pair of Roeckl Sports gloves, and an engraved pewter plate. She also earned the Balmoral Winning Owner Award and  received The Plaid Horse Winning Handy Round Award and the accompanying “Stanley” pony. Kingston was recognized as the highest placing large pony. Liz Reilly was awarded the Blue Ribbon Blankets Winning Trainer Award, and Manuel Lopez took home the EquiFit Groom’s Award for Best Turned Out Pony for his work with Kingston.

Sokolow is new to California; she just moved out west from Pennsylvania. “It feels amazing to win because I’ve only lived here about a week or so. I feel really confident and my trainer is amazing and it’s just awesome,” she said. “Kingston is super fun and he jumps so well. He just feels fantastic.”

The highest placing medium pony of the day was China Blue’s Royal Waltz, owned by China Blue Farm and ridden by Augusta Iwasaki. Iwasaki piloted the medium to a 157 two-round total, which placed them third overall.

Makoto Farm sponsored exciting circuit awards to wrap up Blenheim EquiSports’ inaugural season of USHJA Pony Hunter Derbies. The highest placing small, medium, and large ponies were recognized in the ribbons after each of the four derbies, but grand circuit awards were presented to top finishers from all four events combined. Today’s champions were Heavenly Patch of Blue with Shiloh Roseboom, Elite Hollywood Smoke with Katalina Rickard, Benetton with Stella Wasserman, and Kingston with Gabrielle Sokolow.

Enchantment Farm LLC’s Heavenly Patch of Blue, piloted by Roseboom, earned a Makoto Farm Circuit Award as the small pony with the most total points from the season.

Stella Wasserman’s Benetton and Gabrielle Sokolow’s Kingston tied for the Makoto Farm Circuit Award as the large ponies with the most points. Each finished with 24 points after picking up both a first and second over the course of the season.

“I’m so happy for my friend Stella for achieving her goals and for me achieving mine,” Sokolow said as she and Kingston sported a selection of big blue and tri-colored ribbons.

The Makoto Farm Circuit Awards and the fourth USHJA Pony Hunter Derby of the year mark the end of the pony derby season at Blenheim EquiSports. Exciting upcoming hunter events abound, though. Stay tuned for the USEF Junior Hunter National Championships West and a $10,000 USHJA National Hunter Derby, both at the Del Mar Horse Park in July.