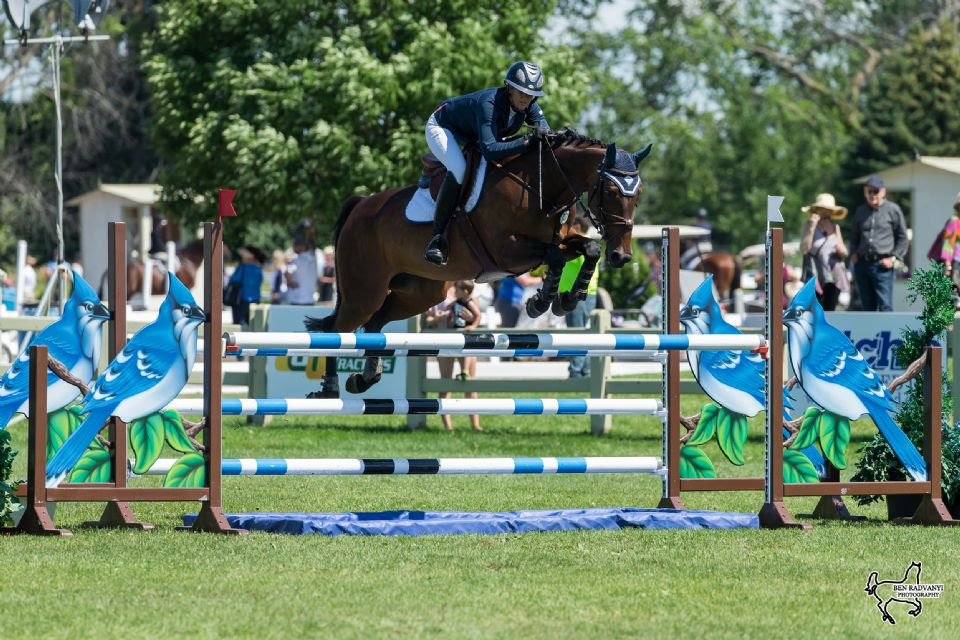 In a race against the clock, Soleau-Millar and her mount, Hoolie Hoo, left all the rails in place over the course set on Wesley Clover Parks’ grass grand prix field and stopped the clock in the winning time of 63.61 seconds.

The early time to beat had been set by Montreal’s Camille Ostiguy Duplain, who had won Thursday’s 1.25m Open Jumper speed competition with the same mount, Run Forrest Run.  As only the second rider to tackle the speed track set by 2016 Rio Olympic course designer Guilherme Jorge, Ostiguy Duplain crossed the timers in 61.08 seconds but, with a four-second penalty added for one rail down, finished with a total time of 65.08 seconds.  Her time would hold up for a second-place finish.

Finishing a close third was local competitor Lauren Hunkin of Ashton, ON, riding Victoria, owned by Brookstreet Stables.  The pair jumped clear and crossed the timers in a time of 65.12 seconds to finish just behind Ostiguy Duplain.

The win belonged to Soleau-Millar, who is based out of Millar Brooke Farm in Perth, ON, during the summer season and her mount, Hollie Hoo.

“Hoolie’s in it to win it, that’s for sure!” said Soleau-Millar.  “She goes in that ring and when they set the tone off to start, you better be holding on because she just wants to go!  You steer and tell her where to go, and she will do everything possible to keep the jumps up.  She’s quite amazing that way.”

Soleau-Millar and Hoolie Hoo arrived at the Ottawa Horse Show fresh off an impressive winning-streak during the four-week Spruce Meadows Summer Series in Calgary, AB, where the pair won all seven of the classes they contested together.

“Hoolie Hoo actually just got back from Calgary and came in specifically for the class today,” said Soleau-Millar of the 13-year-old bay Dutch Warmblood mare owned by C.F. Farms. “We were really excited with how she did!  Now she’ll go home for a couple of days to rest and be back for next week’s Ottawa International Horse Show.”

Kelly Soleau-Millar aboard Hollie Hoo is presented as the winner of the $7,500 Lynn Millar Memorial
Speed Derby by her husband, Jonathon Millar, Amber Marshall, star of the CBC’s Heartland, and Amy Millar.
Photo by Ben Radvanyi Photography

Making the win extra-special for Soleau-Millar was the competition’s significance to the Millar family.  It is held in honour of the late Lynn Millar, wife of ten-time Canadian Olympian Ian Millar, who played a pivotal role in the family’s Millar Brooke Farm operation.

“It’s really special,” said Soleau-Millar, who is married to Lynn and Ian’s son, Jonathon Millar.  “Amy (Millar) asked me just a few days ago if I wanted to ride Hoolie in it.  I was beyond thrilled to have the opportunity.  It is a really, really special win, especially given that it’s held in her honour.”

Jonathon Millar and his sister, 2016 Rio Olympian Amy Millar, presented Soleau-Millar with the win, joined by Amber Marshall, star of the CBC’s Heartland, who is making a special guest appearance at Wesley Clover Parks this weekend.

Earlier in the afternoon, the $2,500 Royal LePage Team Realty Canine Equine Relay saw horse and rider combinations negotiate a show jumping course before their canine partners tackled their own agility course, with the fastest combined time winning.  Saturday’s winning time of 79.22 seconds was turned in by Jacqueline Steffens of Harriston, ON, riding Egor, paired with Ember, a seven-year-old Labrador Retriever.  Finishing a close second with a time of 79.77 seconds was Miranda Travers-Cavill of Claremont, ON, riding Carla, who was paired with Tuula, a six-year-old Belgian Shepherd.  Natasha Begin Fry and Evening Rose placed third with a time of 82.78 seconds paired with Ben, an 11-year-old Border Collie. Competition at the Ottawa National Horse Show culminates on Sunday, July 16, with the $50,000 Brookstreet Hotel Grand Prix beginning at 2:30 p.m.  Amber Marshall will emcee the competition from horseback, making it a great afternoon of family fun.

Admission is $5 a day at the gate, with children aged three and under are admitted free.

For more information on the Ottawa National and CSI3* Ottawa International Horse Shows, visitwww.wesleycloverparks.com.  Be sure to keep up with all the action by following Wesley Clover Parks on Facebook here.

The Government of Ontario has generously provided funding support for the Ottawa National and CSI3* Ottawa International Horse Shows.