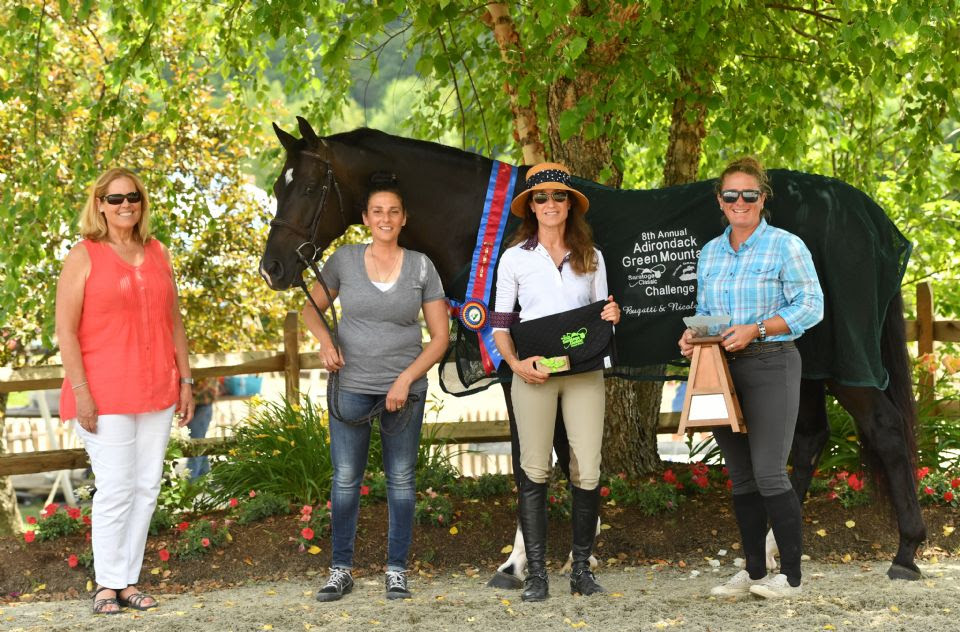 East Dorset, Vermont – Nicole Coppola-Hug of Rotterdam, NY, was awarded the Adirondack-Green Mountain Challenge trophy on Sunday, July 16, for her performance in the Adult Amateur Hunter 36-49 division during both the Skidmore College Saratoga Classic Horse Shows and the first two weeks of the Vermont Summer Festival in East Dorset, VT.

The Adirondack-Green Mountain Challenge is a collaborative effort between the Skidmore College Saratoga Classic Horse Shows, which took place June 14 through 25 in Saratoga Springs, NY, and the Vermont Summer Festival. Points for horse and rider combinations competing at both shows are counted, and the overall high-point winner is awarded the Adirondack-Green Mountain Challenge Perpetual Trophy.

Coppola-Hug and her mount, Bugatti, were named champions of the Adult Amateur Hunter 36-49 division during both weeks of the Vermont Summer Festival as well as the second week of the Skidmore College Saratoga Classic Horse Shows.

“He is so special,” said Coppola-Hug of her nine-year-old American-bred Dutch Warmblood gelding sired by Popeye K. “His canter is like a dream, and he is the nicest horse to find the jumps on. He is always there for me whenever I need him.”

Coppola-Hug purchased Bugatti as a four-year-old from a breeder in Pennsylvania and brought the horse along herself with help from her mother, Alberta Coppola, and trainers Sandy Kelly, Monty Kelly, Amy Momrow, and Shaine Brooks at Stepping Stone Farm. Coppola-Hug has been riding at Stepping Stone Farm, based in Albany, NY, since she was 14 years old.

“This is a special award, and Nicole and I have a special relationship because we grew up riding together,” said Momrow. “She chose the amateur life and I chose the professional life, but she has always been a really great rider and super hunter rider. It is nice to see her be rewarded for her efforts, and because she brought the horse up the ranks herself, it makes this a little extra special.”

Of the Adirondack-Green Mountain Challenge, Coppola-Hug, 44, noted, “I think this is a great award for the adults and children. It really gives those riders something special to look forward to, and ties the two shows together in a really fun way.”

Coppola-Hug plans to continue her success in the Adult Amateur Hunter ranks and, next year, hopes to move into the 3’3” Amateur-Owner Hunter division.