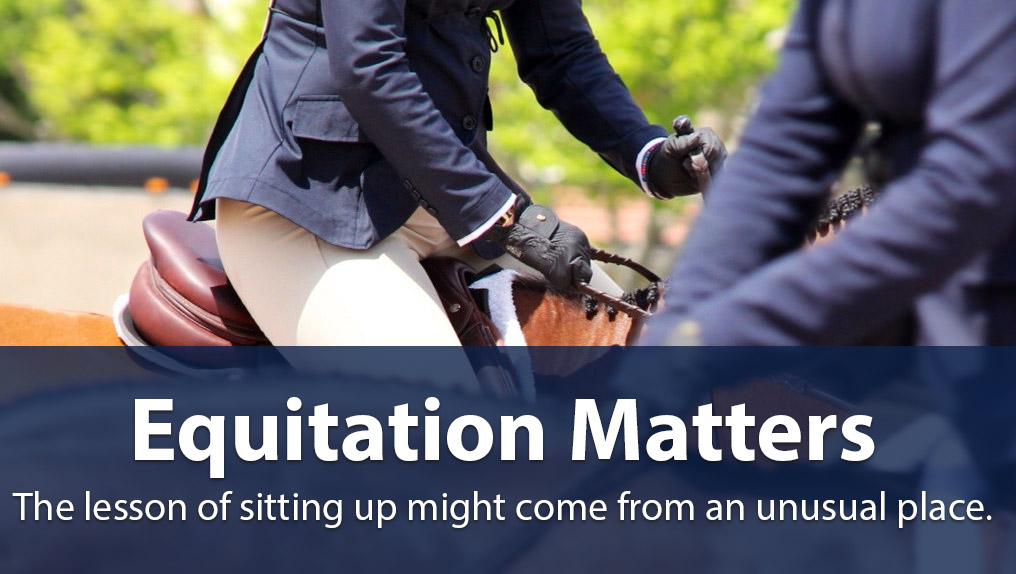 “A bent spine is the enemy of self-realization.” –– Paramahansa Yogananda

Years ago, after a long break from riding, I was looking for a new trainer. I had a lesson with a hunter/jumper rider who told me, “You’re an adult––you don’t have to sit up.” She smiled, conspiratorial, and I thought, this probably isn’t the right teacher for me. I wanted a trainer who wasn’t interested in shortcuts.

These days, I mostly compete at dressage shows, and sitting up straight is one of my challenges. I have been trying to learn this for a long time—since approximately the time I got breasts. Trainers have told me the things we’ve all heard: sit up, stick out your boobs, imagine your breasts like headlights pointing toward the horse’s ears, imagine someone is pulling on your pony tail. I’ve read Sally Swift, Mary Wanless, and countless classic dressage texts, but still, until recently, it felt laborious and stiff to sit up.

To the uninitiated, sitting up might seem cosmetic, but we know it’s not. When your spine is straight, or “neutral,” your shoulders relax, which translates to being soft on the horse’s mouth; your hips relax and become mobile, so you can follow your horse’s movement, but even if you’re fit, it can be hard to remember this uprightness while concentrating on so many other things on top of a horse.

I grew up in a time when I had lots of great models––Katie Monahan Prudent, Leslie Burr Howard, and Conrad Holmfeld to name only a few. They had finesse and great control of their upper bodies, but I know where my slouch comes from: wanting to imitate the hunter riders who seemed unflappable and cool. Almost every weekend, I watched Bernie Traurig and Rodney Jenkins and Bert Mutch cantering around big courses with an elegant hunter slouch. It was the equestrian version of James Dean leaning against a car, smoking a cigarette. The image said: “I can do this, no sweat, I don’t even have to sit up straight.” And though they made it look effortless, if you go back and look at photos, they weren’t actually slouching, it was more that they were relaxed––they had athleticism and feel, and tons and tons of practice.

Like many people, I take yoga classes when they fit into my schedule, and while I aspire to be a better person, I’m a bit of a spiritual slacker. You know that unpronounceable pose where you reach one hand high, then drop it behind your back to hold the other hand reaching up your back? I can no more touch my hands behind my back than fly to the moon. I’m not very good at balance poses either.

Last summer, I took a friend’s yoga class, and we worked on Tree pose. Usually, I wobble, but when I drew the bottom of my shoulder blades down, and concentrated on the area where my bra strap went across my back, suddenly I stood up straight, “spine stacked,” and I stopped wobbling. I was balanced.

When I rode the next day, I imagined the same feeling, and there I was, sitting up straight. It didn’t feel stiff. It was easy. Everything moved, and my shoulders relaxed. Sitting up helped me over fences too. I imagined drawing my shoulder blades down, and thinking about this prevented me from getting ahead of the motion.

I can’t say how the instruction in yoga class was different than any of the instructions I’ve received in the past­­––sometimes we know things intellectually, and it takes a while for our bodies to understand, but thinking about the bottom of my shoulder blades helped me sit up straight.

The epigraph above has floated around in my head for a long time, and while Yogananda was talking about spiritual progress, I have known it applied to riding too. I had to take care of a fundamental if I wanted to make real progress. I can’t say I’ve perfected this, but I’ve put an important piece in place.

It’s Pride Month! What Does That Mean?