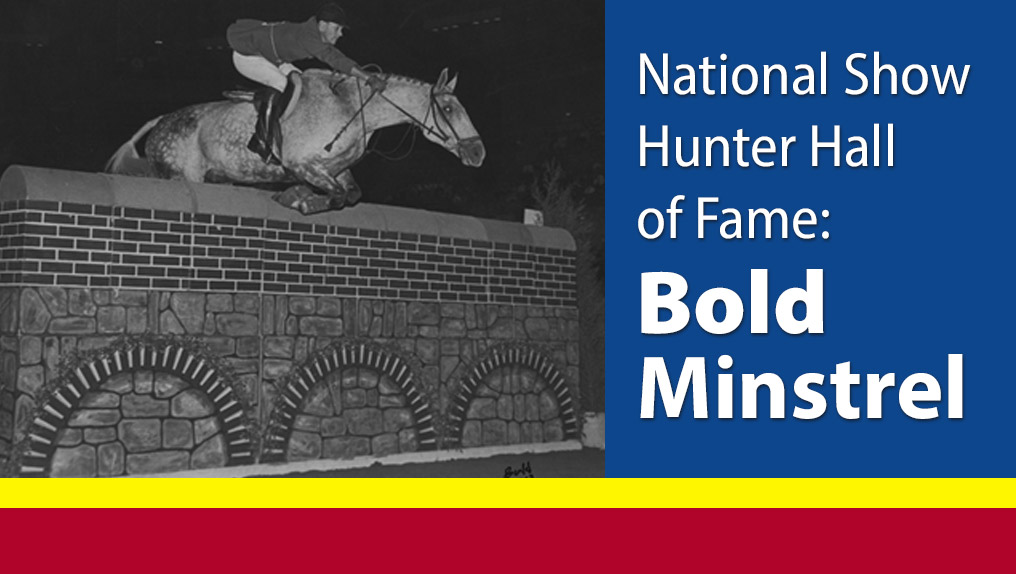 Bold Minstrel is the only horse in history to medal in three Pan American Games and one Olympic Games in two different disciplines: eventing and show jumping. Imagine a horse today achieving this herculean feat. It is inconceivable. For the horse known affectionately as “Fatty,” this was no small achievement.

Without an owner with the competitive curiosity to test his own mettle in many disciplines, Bold Minstrel might not have had the opportunity. William “Billy” Haggard was a hunter rider who dabbled in eventing when he befriended members of the United States Equestrian Team. The legendary William Steinkraus, then USET Show Jumping Team Captain, was training in Tyron, NC in 1956 when Haggard told him he was looking for a Games horse and asked him to have a look at one. Bold Minstrel, a stunning 16.3 gray crossbred by Thoroughbred Bold and Bad out of crossbred Wallise Simpson, was then 5 years old.  Steinkraus explains, “I told him, ‘If you don’t get him, I’ll get him.  He’s a terrific type. I like the way he moves and his jump will develop.’”

Haggard began showing him with success in the Green Hunters while also foxhunting and eventing. Quickly rising through the levels, Haggard and “Fatty,” always an appropriate name, joined the USET and finished 9th individually in the 1959 Pan Am Games in Chicago, helping the team win the Silver Medal.

With four more years before the next Games, back to the Hunter ring the two went, showing in the Regular Conformation Hunters at 4’, and winning Championships all over the northeast, including a Reserve Championship at the National Horse Show in Madison Square Garden in the early 1960s.

At the 1963 Pan Am Games in Brazil, Haggard and Bold Minstrel placed sixth individually and helped win the Team Gold. Steinkraus says he pestered his friend continuously. “I’d say, ‘If you ever get tired of this three-day nonsense, let me make a jumper out of him.’”

Haggard was an alternate for the 1964 Olympics in Tokyo, but stayed at home. Flying horses then was not what it is today. J. Michael Plumb’s horse Markham had to be put down on the plane as it flew to Tokyo. Before Plumb had time to worry, a call was made to Haggard asking if he would loan Bold Minstrel to the U.S. Eventing Team.

“Billy Haggard was a very good friend of mine, a great sportsman and just the best fellow,” Plumb remembers.  “Fatty was a superior animal. He was always way too fat because Billy was a Hunter guy. But, he was phenomenal, all-purpose. He could’ve been anything. Billy had a great relationship with that horse.  When asked, he never gave it a thought.  He just sent him over – the best horse ever,” remembers Plumb. They had less than two weeks to get to know each other. “It was certainly a catch ride. Minus about 1,200 pounds he probably could’ve won the gold medal instead of 15th and Team Silver.”

Steinkraus continued to pester Haggard, beseeching him to loan him the horse for a whirl in the Nations Cup show jumping arena. Finally, he gave in and Bold Minstrel again became a USET success story, competing and winning internationally between 1967 and 1970. He made his third appearance at the Pan Am Games in 1967, finishing 9th individually and part of the Silver Medal Show Jumping Team.

“He had a very good physique, a very good brain, a lot of heart and an innate jumping ability. The only problem I ever had with him was he made all the decisions. He said, ‘Look, I know more about this than you do’ and I’d say, ‘Yes, but I’ve walked the course and I know what’s coming.’ It took a long time to persuade him.” Nothing made owner Haggard more proud, Steinkraus said, than when Bold Minstrel broke the record in the old Madison Square Garden, winning the International Puissance by clearing the 7’3” wall.

In 1970 at the age of 18, Bold Minstrel jumped  to a 9th place finish in the World Championships in LaBaule and won the Democrat Challenge Trophy for show jumping at Madison Square Garden. It was then he was retired from competition, only to become Mrs. Haggard’s field hunter.

A Thoroughbred cross, known for his ample girth and limitless jumping ability, Bold Minstrel may have been the greatest jumping horse of the 20th century. While his victories are a matter of record and the height of the Puissance wall is measurable, no man can quantify the heart of an amazing animal. A few riders were lucky enough to sit on the horse, all of America was able to behold his greatness.