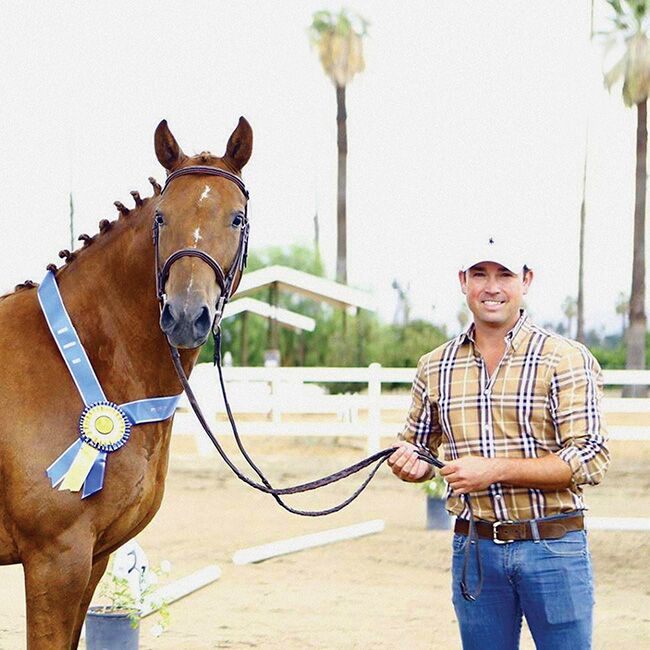 On a sunny day this past September, the 2017 crop of Hanoverian foals at Ryan Pedigo Hanoverians in Riverside, California took to the ring to strut their stuff for American Hanoverian Society judge Meg Williams, AHS President Edgar Schutte, and a throng of spectators eager to cheer for the foals as each took his or her first trot into the spotlight.

A foal inspection is always thrilling to watch, with the requisite, adorable bucks and squeals, but there was something extra special about this herd of nine foals, along with one mare and one 2-year old colt presented for inspection. The word of the day was “consistency,” as judge Meg Williams found herself repeating it often.

“You can see very much in Ryan’s foals, the stallions are really stamping these offspring, and as breed inspectors we like to see that,” said Williams. “We want to see what both the mares and stallions are producing. Are they producing correct foals? Do they have enough movement? Are they good in type?”

The answer to those questions was a resounding “yes.” With cookie cutter consistency, each foal proved to be typey and correct, and many took the opportunity to show they were athletic, powerful, and light on their feet.

For breeder Ryan Pedigo, the judge’s remarks confirmed that he is achieving exactly what he set out to do when he started his program only ten years ago. “I’m not breeding in hopes of getting a few good foals out of each crop,” Pedigo explained. “I’m breeding for consistent top quality, from the first foal of the year to the last.”

Pedigo was a trainer at Kennedy-Pedigo Farms when he was tasked with finding the perfect hunter for an amateur client. After an extensive search he settled on Wolfe WF, a horse he immediately knew was something special. “He was only five years old,” recalled Pedigo, “but he was spectacular. A true athlete with beautiful movement and style, just the ultimate hunter, as well as rideable and amateur friendly.”

Wolfe quickly proved to be a champion, and Pedigo’s interest was piqued. He took an in-depth look at Wolfe’s bloodlines: his dam, sire, and their offspring. What he found was remarkable quality and consistency, stemming from Wolfe’s granddam, Frederika (Feiner Stern – Trapper), a State Premium Hanoverian mare brought from Germany to Canada by the late Canadian breeder William Mulholland. Frederika had nine daughters, though five had been sold after Mr. Mulholland’s passing. But Pedigo tracked them down, purchased all nine, and brought them to southern California to lay the foundation of Ryan Pedigo Hanoverians.

“It’s all about the mares,” said Pedigo. “Anyone can breed a mare, or choose a popular stallion. This is something some lose sight of, but the mare is even more important than the stallion in the breeding equation. As I look out over the herd, it’s tempting to want to ride and show all of them. But you have to breed the best mares.”

Frederika has since passed away, but she has continued to stamp her great-granddaughters, even five generations out. Of course, the stallions do play a significant role, and after careful research, Pedigo acquired four Hanoverian stallions: Wolfe’s sire, Elite Stallion Wellesley PF, as well as ES Sam Steele PF, ES Magic PF, and ES Federalist PF.

“They’ve proven to mix very well with the broodmare band,” said Pedigo. “It’s really a golden combination. The resulting offspring have the high performance capability that a professional rider desires, but temperaments well-suited for junior or amateur riders.”

Pedigo’s breeding program, with its focus on the hunter division, is an important piece of traditional Hanoverian breeding. “There is no class for hunters in Europe,” said AHS judge Meg Williams. “There is a huge market for hunters here in the United States. It’s hard for the Europeans to understand because there aren’t hunters there. We’ve spent a lot of time trying to educate the German inspectors in what we look for, and why it’s so important.”

The American Hanoverian Society enjoys full reciprocity with its German counterpart, which now accepts stallions based on hunter performance in addition to jumper and dressage performance. “Breeding is down worldwide,” explained AHS President Edgar Schutte, “but we have programs in place to help American breeders, and we hold about 30 Hanoverian inspections per year in the United States.”

Pedigo is proud to bring traditional German Hanoverian bloodlines to southern California.
“It’s like a little piece of German history right here in California, but with a focus on the American hunter ring.”

Pedigo currently owns 26 Hanoverian mares, and he selects a handful of fillies each season that will become part of his broodmare band. Each of the nine original sisters now has daughters, granddaughters, and great-granddaughters in the band.

In addition to his breeding program, Pedigo runs a full training barn and maintains a busy show schedule each year. He teaches all levels of hunter, jumper, and equitation riders, from the complete beginner to the most serious A-circuit competitor.

“It’s especially rewarding to be a part of every aspect of the development of the hunter horse,” Pedigo said. “From selecting the mare and stallion, caring for the foals, and training the young prospects, to matching each hunter with his or her rider and helping the partnership grow. There’s nothing better.”