Home Blogs One Bold Move After Another, Adrienne Sternlicht makes the US Show Jumping... 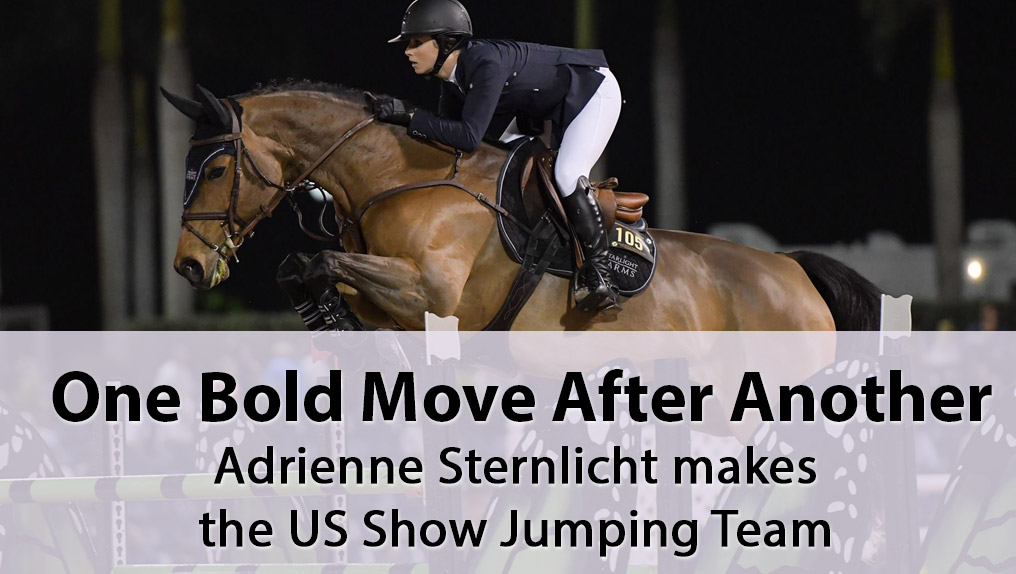 Adrienne Sternlicht, a native of Greenwich, Connecticut made headlines when, about a month ago, she jumped over a hedge in the jump off with her 10 year old Bavarian warmblood mare Cristalline to secure third place in the $132,000 Adequan Grand Prix CSI 3*. While the move was bold, it only seemed fitting for how she has been living her life so far. Although Sternlicht was quite successful in the pony and junior rings riding with distinguished trainers Andre Dignelli and Patricia Griffith, riding was not something she was always able to do full time.

Her parents wanted her to be well balanced, so she also took up competitive skiing in addition to squash, which she would go on to play at a varsity level at boarding school. While her dream was to be able to ride full time, dedicating herself to other sports helped Sternlicht learn how to channel her competitiveness as well as give her first hand experience with other individualized sports. Today, Sternlicht still maintains a balance in her life. “I also work for a nonprofit in NYC, which keeps me intellectually stimulated and allows me to pursue another passion outside of riding.”

Once she was accepted to Brown University via early decision, Sternlicht’s parents understood that riding wasn’t just a phase, and supported her decision to ride full time while attending college.

Since then, Sternlicht has competed in around North America and Europe with the help of prestigious riders Laura Kraut, Linda Langmeier and Nick Skelton – and currently trains with McLain Ward.

“I’d say my strengths are my focus – but also the balance I’ve started to find in and out of the saddle,” Says Sternlicht of how she finds ways to improve her riding while not necessarily being in the saddle. “I’ve become very dedicated to my yoga practice – It’s a really nice compliment to my riding because it forces me to slow down!”

Most recently, the 23 year old made the US Show Jumping team for the $150,000 FEI Nations cup CSIO4* Wellington, presented by U.S. Trust Bank of America Merrill Lynch, alongside Lillie Keenan, Beezie Madden, and Catherine Tyree. The class will be held during week eight of the Winter Equestrian Festival, on Saturday March 3rd, at 7pm, located at the Palm Beach International Equestrian Center.

Miracles at the Base of Mini Mountain: Healing and Love at...