Home Blogs Jamie Barge and Luebbo: From a Fourth in Ocala’s Million to the... 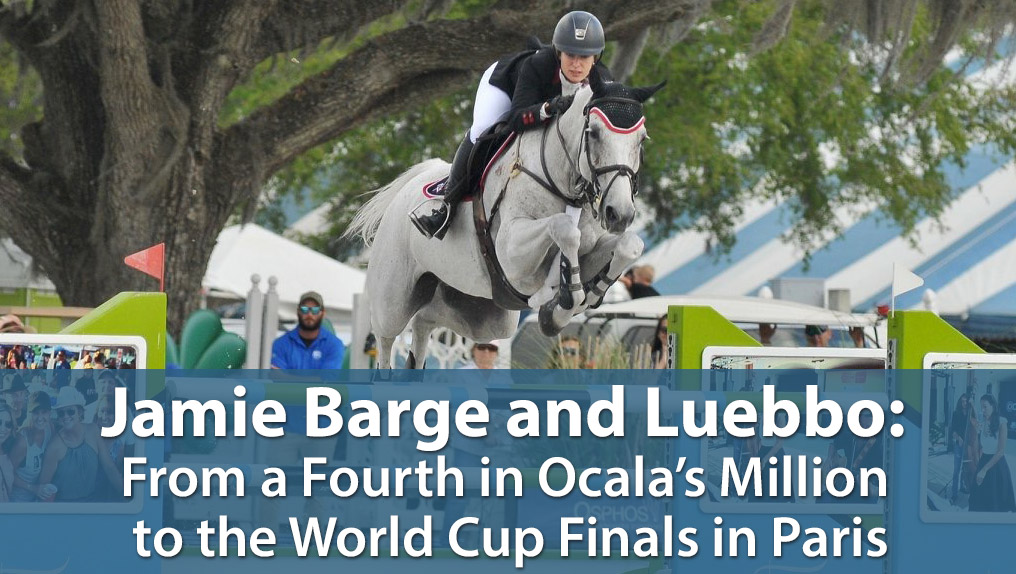 California based US rider, Jamie Barge, and her mount Luebbo have been on fire lately. The pair recently blasted into top ribbons at the Great American Million in Ocala, Florida, placing fourth in a super competitive field. Barge enjoyed the challenging but fair course set by Alan Wade. “It wasn’t huge, but the oxers were wide enough and there were a few really tall verticals,” Barge said. “He made the course difficult enough that it was tricky to jump clean, but no horse had a really bad experience.”

Trotting into the ring with Luebbo, Barge was prepared for the challenge set. “I was actually really focused and super relaxed,” she said. “Luebbo tends to get really excited, so I try to stay extremely relaxed for the both of us. He usually jumps his best when he cues into how relaxed I am, and tones the excitement into focus.”

After a clear round, Barge built a strategy for maximizing the jump off. “I knew the other riders were going to be really fast, and I KNEW that Beezie would be hard to beat,” she said. “I tried to go for it, but most importantly jump clean. I felt I had to take a little more time to the one stride to get Bo’s eye on it and at the slice at the vertical, I just saw the nice quiet one which slowed me down a bit.” Barge and Luebbo’s efforts held them at third until Charlie Jayne and Tou La Moon barely edged them out.

Still, Barge’s fourth was a fantastic triumph to the HITS Ocala newcomer. She attributes her success to keeping Luebbo, a thirteen-year-old Oldenburg gelding, fit and happy. “Gaby Salick helped me come up with a really good training program for him and for the most part I’ve kept it the same,” Barge explained. “He has really grown up and learned a lot. Therefore, I try not to over jump or over train.”

Luebbo, or Bo, is a great partner for Barge with his enthusiasm and charisma. “He’s little, has a lot of blood and loves to jump,” she said. “He is very smart, and has a big personality. He’s sweet when he wants to be, but also loves to play games. He also has the biggest heart of any horse I have ridden.”

Having qualified for the World Cup in Paris happening April 11th-18th, Barge has headed to Europe and shifted her sites to the finals. “Originally I wanted to come early and show indoors at Dortmund, Germany,” she explained. “Instead, I decided to jump Live Oak and the Million in Ocala to get good practice at the bigger fence heights.” After the million, Barge came to Europe early to get Luebbo adjusted and used to jumping indoors again. “We only have three shows that are indoors in California and they are all in the fall. We also only have one 1.60 class in February, then no more until October… so I felt we needed to revisit those situations.” Barge will strive to help the US bring home its second consecutive World Cup Final victory, with McLain Ward and HH Azur winning last year.

As for the rest of the year, Barge’s focus isn’t on top prizes but instead her partner. “I want to keep it fun for Luebbo!” she said. Barge also plans to bring up her other two horses in a positive training experience, so they might love to jump as much as Luebbo does. With her recent success and horsemanship focused training program, we will undoubtedly be seeing Jamie Barge in many jump offs to come.

Camp Hobbit Hill: The Riding Camp of Your Dreams