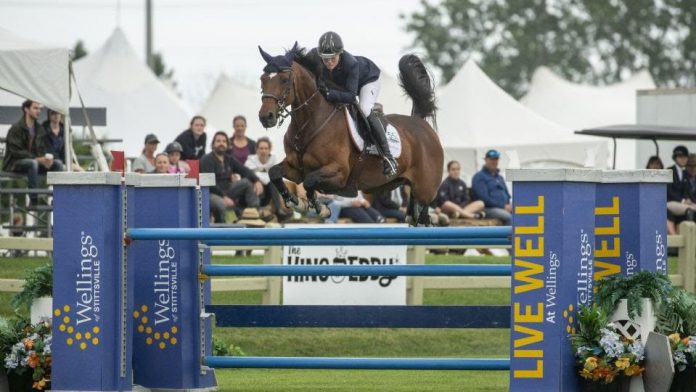 Ottawa, Ontario – Canadian Olympian Beth Underhill of Schomberg, ON, won the $36,000 CSI2* Open Welcome, presented by Wellings of Stittsville, on Friday, July 12, at the CSI2* Ottawa International I horse show at Wesley Clover Parks in Ottawa, ON.

A starting field of 37 entries contested the first Fédération Equestre Internationale (FEI) class of the week, with 26 of the entries competing on Thursday afternoon before the decision was made to reschedule the remainder of the class for Friday morning due to severe weather. Before the class was called for the day on Thursday, Hyde Moffatt of Brantford, ON, riding Grafton, and U.S. competitor Christine McCrea aboard Jarcobond van den Oude Eik had jumped clear to qualify for the jump-off. When the class resumed on Friday morning, Underhill and Count Me In added their names to the jump-off list by jumping clear over the course set by 2016 Rio Olympic course designer Guilherme Jorge of Brazil.

With only three entries qualified for the jump-off, Moffatt and McCrea elected to forego the jump-off and tie for second place. Underhill proceeded to the jump-off, opting for a conservative clear in a time of 50.54 seconds to take the win.

“I wanted to do my best to try to be competitive,” said Underhill of her decision to jump-off after Moffatt and McCrea had opted to withdraw from the final round. “I thought it was good for my horse to go again without the added pressure of having to go fast in a jump-off, and for my owners as well. For me, it was a little bit of an advantage to be able to get him out a second time, and barring forgetting the course and eliminating myself, I knew we could win if we just had a nice round.

“I was thrilled that he jumped a second clean round as well as he did, and did everything that I asked of him,” continued Underhill of the 12-year-old Hanoverian gelding (Count Grannus x Sherlock Holmes) owned by Sandy Upton and Robert Caswell. “I was just thrilled with how he handled the field. He felt comfortable on the footing.”

The Ottawa International marks Underhill and Count Me In’s final competitive appearance before traveling to Lima, Peru, where they will serve as the Canadian Show Jumping Team alternates at the 2019 Pan American Games. Canada will be looking to defend its Pan Am championship title when show jumping events take place from August 6 to 9.

“We’re just starting back into our show season,” said Moffatt of his decision not to jump-off. “We had a nice winter season in Florida, so we’ve delayed starting to show until right about now. He really hasn’t jumped very many classes recently, so I’m really just looking out for what’s best for him. It’s early in the progression of what we have planned for the rest of the summer, and it seemed like the prudent thing to do.

“I loved the course; I thought it was a real riders’ course,” continued Moffatt of Jorge’s course set on the expansive grass grand prix field at Wesley Clover Parks. “I thought it was quite challenging with the time allowed. The field was absolutely fantastic. This is probably the nicest grass grand prix field that we hit all year. It’s really a pleasure to ride here.”

﻿“Count Me In loves it here, and it was a super track,” said Underhill, who previously won the $100,000 CSI2* Classic at the 2016 Ottawa International and the $50,000 Brookstreet Grand Prix at the 2017 Ottawa National with Count Me In. “The time allowed was definitely a factor, and that pushed the riders into having to take a quick route which caused some rails for sure. I always find Guilherme’s courses a pleasure. They improve the horse’s jumping throughout the week; they bring our riding to a new level because he’s such a good international course designer who designs all over the world, so he’s always so current and inventive.”

Weekend highlights at the CSI2* Ottawa International I include the $36,000 CSI2* Classic, presented by RBC, on Saturday at 2:30 p.m. and the $5,000 Canine Equine Relay, presented by Royal LePage Realty and featuring dogs from Dogz Canine Sports Centre, at 1 p.m. on Sunday, July 14. Prior to the popular Canine-Equine Relay, a special “Meet and Greet” with 10-time Canadian Olympian Ian Millar will be held on Sunday, July 14, from 11:30 a.m. to 12:30 p.m.

Photographs may be used one time only in relation to the above news item.

Strides for Equality Equestrians (SEE) Awards Winter 2023 Ever So Sweet...