Home Blogs Partial Board Finding a Change of Perspective 4,000 Miles from Home 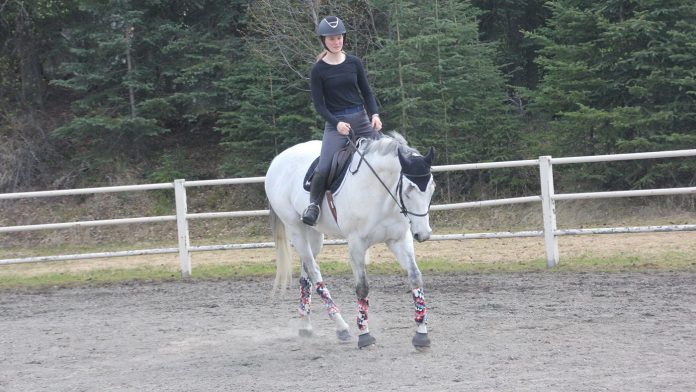 For a long time I thought my horse, Wyatt, was dumb. He was a green bean when I started riding him. He just did not catch on the way my other young horses had. We could do the same exercise over and over, and it never felt like it would sink in. For literal years leg yields and lateral work felt like a new learning experience every time we worked on them. And don’t get me started on lead changes or something as rude as asking him to go forward.

But I loved him despite the sass and perpetual green feeling.

I loved him so much, in fact, that when my husband and I moved to Alaska for his career in the Air Force, Wyatt tagged along too. I didn’t plan to show much. I gave up on those goals. I figured maybe I would like trail riding? I thought I would find something easy we could enjoy, and that would be it.

But something made me give it one more try. I missed jumping. At the very least, we had always been able to fake our way around a 2’6” course. Enter our new trainer, Dana Eaton of Eaton Equestrian Centre. Her approach was more “European” than my trainers in Connecticut, or frankly anything that I had come up with on my own. She asked me to ride in strange positions, with only one hand on the reins. She taught me to use my seat.

In just a few lessons, Wyatt was a different horse. Move your hips to turn, and he was right there—no more bulging shoulders. Move your hips to follow his footfall at the walk, then the trot, and just like that he had a forward uphill trot and canter. Shift my hips again, and BOOM that lead change that had been a struggle for over two years just happened!

One day we were doing an exercise that I was struggling to figure out. When I finally put my seat in the correct position, I felt his whole body change as he did the movement fluidly. He literally sighed, thankful I had finally caught on.

It turns out that my horse was not dumb or disobedient (though admittedly he is still a bit sassy).

For years, he had been asking me to ride him in a way he understood. It just took me moving 4,000 miles to figure out. It took me thinking my show career was probably over and giving in and letting go to realize just how insanely smart he was.

I am not saying everyone should leave their trainer—or move across the country for that matter—when something isn’t clicking or working. But I do know that there were many times I wanted to give up, but for some reason kept at it.

In “the lower 48” (as Alaskans call it) when something doesn’t seem to work, many people will sell their horse and buy a new one. In Alaska, our horse population is a bit smaller. Shipping horses here can be very pricey, so we have to learn to work through and be creative about how we approach things. Moving up here has been a breath of fresh (very cold) air.

Being somewhat isolated means the equestrians here tend to work through problems a little bit longer. And with Wyatt, I’m glad I did. This change in perspective has rejuvenated my riding, given me more tools for my toolbox, and opened up an exciting new chapter with this horse. It’s a lesson I won’t forget no matter what state I live in.

Sound Advice: Five Ways to Have the Best-Behaved Horse at the...