Home Blogs Partial Board It is Still Possible to Have a Successful Working Student in Today’s... 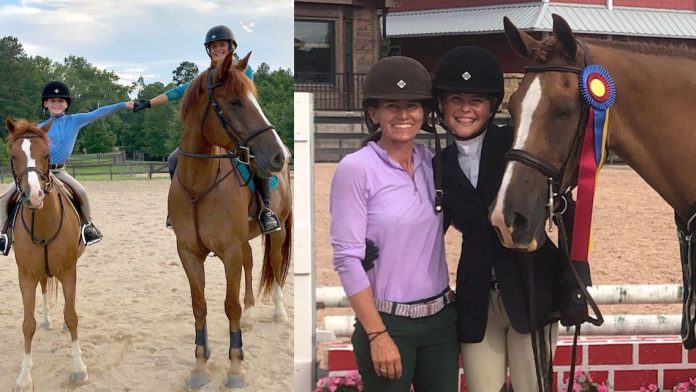 A couple months ago, I gave a lesson to a 14 year old named Payton.  She was brave, followed direction well, and had good equitation with soft hands to boot. My schedule had some shows at the Tryon International Equestrian Center coming up, and she expressed how much she wanted to show there. I mentioned to her mother that I would be happy to have them join us, and they said they would really like to set that as a goal.

At the time, I had no idea this student had never taken her horse to a show over fences. She had done some crossrails, and that was all. She really didn’t know where the ideal point of take-off was to the jump, and counting strides wasn’t something she realized was crucial.  She didn’t understand that the second jump of the line should be the easier jump of the line. She still looked down for her diagonals like she did when she was 7 and I judged her in the walk-trot at a local show. Yes, I remembered her even then – she had a cute little bay pony, was turned out well, and she had great equitation then, too.

To join us at Tryon, she needed to jump about 1,000 jumps before she’d be ready. Of course, that’s clearly more than a single horse would have in them in a short period of time. So—GASP—I asked if she wanted to be a working student.

When those words left my mouth I almost wanted to take them back. I had never had a working student. When it comes to the barn and the horses, I’m a neat freak and would rather do things myself. However, it had been insanely hot and getting everyone ridden at a decent time was getting harder and harder.

As soon as I offered, I realized it takes a team of people to make a working student situation work:

Payton came with us to Tryon to watch, learn and help prior to bringing her own horse to compete. I showed her how to unbraid the first day and she liked it.  Thankfully, because about a year ago I hit that ‘I need reading glasses’ point in my life and that is not my favorite thing to do anymore! She cleaned the stalls without asking, dumped buckets and gave fresh water without asking.  Walked a lot, got up early, made friends, rode a little, learned a lot (and probably laughed a lot, too).

When it came time to bring her horse, we were ready.  Maybe not regarding her show nerves, but the student was ready, the horse was ready (he did spend one week with me for some additional training), and off we went.

Show day one did not yield any over fences ribbons, but a 5th in the 12-14 equitation on the flat made her just as happy as winning a class makes many children.  Many photos were taken with that pink ribbon. We talked about what we needed to work on the next day, and watched videos from the day (of her as well as others in the class).

The second day got much better. The Pre-Childrens division was large (18 entries), but one of her trips didn’t have any major errors and was awarded a second place.  She couldn’t believe it! Her first over fences ribbon – at an A rated show – one she won’t forget.

The day kept getting better. We continued with two more classes while the learning was fresh, and she went in with confidence and determination. No mistakes, no adding.  I heard the results before she did. She won that first class and… she won the second. She was shocked and excited, it was honestly infectious—you would have thought she won a Devon blue ribbon.  Many people commented how they wished everyone that won was that happy. She hugged her horse, and told him he was the best. When she ended up champion and she won a green Tryon International scrim she threw both hands up in the air and yelled ‘yes’!  It was precious. It really was.

Payton doesn’t shrug anything off when it comes to her working student duties.  She put a lot of thought into questions I asked her the next time she came to the barn after the show.  I asked her what she learned. She had a hard time wording it, but she said the most important thing she learned was never think you’ve done enough, just because you’ve done it right once.

We don’t all have the time to be a mentor or take on a working student.  I didn’t choose the student or the horse that was already winning. Rome wasn’t built in a day, and we have so much more to learn together.  I have learned much from her as well.  Like how little it still takes to entertain my nine-year-old son. They quickly became friends both at the barn and swimming together at the hotel pool while her mom and I watched. The entire experience wasn’t just about winning—it was a win-win situation for all.  The blues were just icing on the cake.

Jennifer Taylor is a life-long equestrian who specializes in ponies. Riding has become a family affair with her son recently taking the reins and her mom managing the farm when she is away. She owns and operates Challenger Farm in Huntersville, NC.

6 “Dressage for Jumping” Quotes from Laura Graves to Improve Your...