Home Blogs Tack Room Redingotes and Feathers: The Secret to Looking Nice is Following Your Personal... 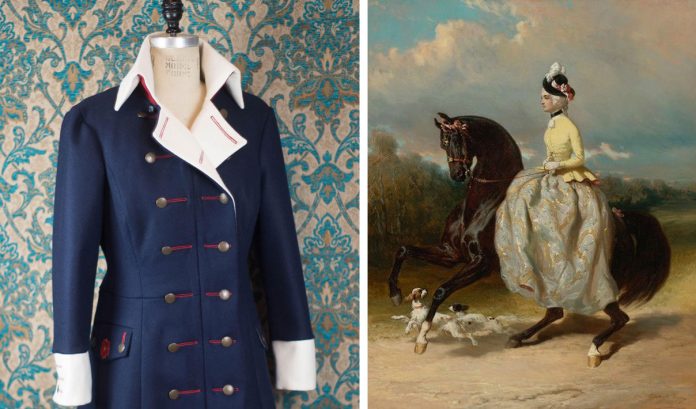 Despite being the sort of person who spends most of her time in pajamas, I find myself quite interested in fashion and aesthetics. Stranger yet, I was the child in the pony ring who pouted at needing to ‘look traditional,’ and begged to know why I couldn’t ride and show in yoga pants. Riding clothes are stinky, I told myself, and I believed it for quite a while. It took until I was a young adult meandering through college before I began to reconsider equestrian fashion as I knew it.

What we wear is a big deal. I won’t pretend it isn’t. It’s a rite of passage for the green rider when they get their first show clothes, and confused parents have to listen to trainers on what is and isn’t acceptable. Everyone wants to hear what judges dislike when a rider walks into the ring. [Spoiler: It’s typically bedazzled hunt coats.] There’s not a day that goes by at the barn when someone squints at a rider and says, “You need to tell me where on earth you got those breeches!” We put on shadbellies for derbies in the name of foxhunting. We spend more time deciding what saddle matches the chestnut horse in the barn than we do on what we’d name our children.

This journey begins with Danielle Goldstein. Feathers in her hair, yoga pants wearing, Danielle Goldstein. The first time I saw her, I quite nearly spit my drink, and wondered where she was when I was a child. The second time, it was in a Facebook article, and several comments were posted underneath. People condemned her. They voiced their disgust and said such statements belonged out of the ring, and to return to good ol’ tradition. Yet, there is no rule against it. And, it was something she does for her own happiness.

I sat there, heart soaring, and began to look for my own feathers. If Danielle Goldstein could follow her fashion dreams, why couldn’t I? All of a sudden there was a newfound confidence and curiosity. Somewhere out there had to be the best looking clothing I could find. A dream outfit became my metaphorical feathers, and something clicked in my mind. I cared about fashion, and not just what a judge would think of it. Curse you, Danielle! I thought to myself. My wallet might hate this!

This journey to looking nice brought me to the next two places: the tradition before tradition, and my friend Clifford.

Clifford, too, cares very strongly about looking nice. The first time I met him, he rolled up in tinted shades, a Ralph Lauren polo, and Sperry’s. He knew more about my riding clothes and tack than I did. I think he left our campus post office with new sweaters weekly. He joined our IHSA team and boarded his horse next to mine, so we hit it off. And by hit it off, I mean we had this frequent encounter:

“Psst, Clifford, what do you think of this coat?” I’d ask him, showing an image on my phone. “Isn’t it great?”

That was a code that he most certainly did not think it was great. I’d ball my fists and tell him he was annoying, a pain, you know, what friends call each other. Occasionally, he would take my phone and tell me, “oh. That is nice.” But you see, this was a rarity. And it happened far less when the oldddd tradition happened, and I began to show different kinds of clothes.

I don’t know if it was paintings of Victorian ladies on horseback or the movie The Scarlet Pimpernel, but I found myself going down many 1 AM rabbit holes of the history of equestrian fashion. It was strange. I never cared for the ‘traditional’ riding clothes I was forced to wear, but looking at those poofy hats and long-skirted riding habits did something to me. I wanted nothing more than to wear outfits more like that, and for someone to approach me wearing one, since I knew I would marry them immediately.

I so frequently talked about this fashion and collected so many poofy hats that people jokingly asked if I felt like I was born in the wrong generation. Well, yes, sure, but the thing is, I don’t want to die from smallpox, and I enjoy watching Gordon Ramsay on my television.

One piece of fashion intrigued me the most—the redingote jacket. It was, essentially, a “riding coat,” named after how the English sounded to the French, the “redingote.” Reding-ote. Riding-coat. It was a more practical, less dense version of the riding habit. They were beautiful, and some googling showed me modern ones. Those, too, caught my attention. That was when my feathers hit.

I wrote to a tailor I adored and followed on social media, Lianna, from Denver Dressmakers/Vigilante Labs, and asked if it would be possible to make a redingote that combined the old styles like the paintings with the new. Not only did she get back to me, but she did with sketched mock-ups. And there it was. The first clothing item I truly cared about.

I dropped everything and made it my mission to obtain this coat. It was months of not buying anything and choosing between swatches and stitches, but eventually, that jacket came in the mail.

I put it on, and went and leapt on my horse. I had never felt more me, and more beautiful.

It is very far from Danielle Goldstein’s self-expression. It made Clifford go, “I’m sorry, you did what?” I wouldn’t be allowed to horse show in it, but my ability to wear it day-to-day and ride out in it is all I could ask for. And, to my surprise, it inspired me to learn how to make my own clothes, and be far less bothered by what I would choose to put on.

Now I shake my fist more than I did before at articles on fashion and the comments reaming certain choices. Day in and day out, there are new works on the latest trends, and what not to wear. So many ask what the secret to looking nice is. But the reality is, things are not everyone’s cup of tea.

There’s what’s required to wear in competition, but beyond that? There are so many possibilities, and no one should feel like they need to wear this polo or that polo to be considered valid. Maybe some might furrow their brow at a unique fashion choice, and that might be a knock to confidence, but! But, but, but! That moment of self-awareness, that moment of feeling different, holds so much less power over you compared to the comfort, self-love, and gratification of looking the way you want to.

See, the secret to looking nice is wearing what you love. You can dress like a Victorian lady or a Clifford, and both decisions are beautiful and worthy. Horse riding clothing and gear is too expensive to buy what we don’t actually like. And if you cannot wear that pink hunt coat or feathers in the hunters and equitation, jumpers are equally as fun.

Happy Holidays from The Plaid Horse