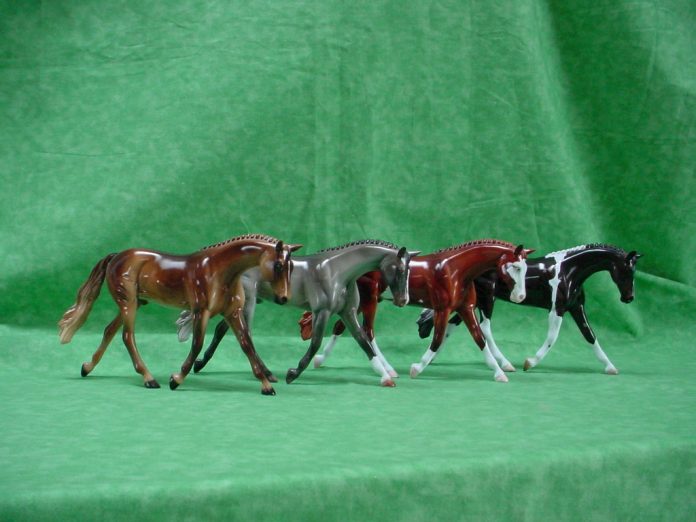 These were words that I heard over and over again from the other model horse sculptors and model horse painters I talked with this past month. It was their love of horses, both real and model, that inspired their work. Peter Stone, former President of Breyer Animal Creations—a division of Breyer Molding Company when it was based in Chicago— and the founder of Stone Horses with his wife Elaine, employs female horse sculptors and artists almost exclusively. This wasn’t intentional, said Mr. Stone. “From my own experience men are conditioned by our culture to view horses as a means to an end whereas women generally are conditioned to view horses as ends unto themselves,” he noted, adding that he thought women were particularly talented in this regard was that they “learned to express their love of horses three-dimensionally.”

Ms. Cantrell, who collected model horses as a child and rode real horses for many years too, has been sculpting horses for nearly three decades. She has made models for Stone Horses, Breyer and many, many private customers. Her first professional work was “a rather hideous Hackney pony for Breyer,” by her own account and her latest Breyer creation is a decidedly non-hideous Australian stock horse.

According to Stephanie Macejeko, Vice President of Marketing and Product Development for Breyer, the company employs 15-20 freelance sculptors all of whom are female. “I’m trying to think if we have a male sculptor,” she said. Model and real horses offer a similar bond for women, she said. Both are about building a relationship she noted, adding. “The model horse world is emulating the real horse world-you’re imagining all the adventures you might go on.”

Those adventures might include showing model horses in classes like dressage and jumping and western pleasure or breed classes for Quarter Horses  and Arabians much like the “real” horse world with a similar attention to confirmation and turn out and tack. Model horse show people pay an exquisite amount of attention to turn out and tack- and pay a lot of money for it as well- just like their real horse owner counterparts.

Unlike real horse shows, however, there are also classes for specific horse models – for example, there are classes strictly for Breyers and Stone horses and custom-made horses too. These shows might be in-person (wherein models are placed on tables for judges to examine them) or virtual, wherein the judges make evaluations on horses from photographs taken by model horse owners.

The largest model horse event is Breyerfest. Held virtually last year and scheduled to be held virtually this year as well, the last live Breyerfest (held in Lexington, Kentucky) attracted as many as 34,5000 participants from 100 countries. Ms. Macejko believes that many model horse owners, who may or may not own ‘real’ horses have an even broader understanding of the horse world than their real horse counterparts. “They know multiple disciplines and understand color genetics,” she said.

Color is enormously consequential in the model horse world- and certain model artists have become famous for their abilities with particularly intricate patterns and hues. For example, Indiana-based Sheryl Leisure is particularly well known for her intricate dapple grays and Appaloosas and her price lists reflect this complexity with “deluxe” and “extreme” prices. An “extreme” dapple costs $400 and an “extreme” Appaloosa (“wild and crazy with lightning marks”) costs $300 versus a an Appaloosa painted with a simple hip blanket ($350).

The price of a custom model horse can be as little as $400 to $500 for a  “stablemate” size to a few thousand dollars for standard size, according to  D’Arry Frank of Lexington, Kentucky. Ms. Frank, a former three-event rider, has been sculpting and painting model horses for nearly 50 years. By her own admission, Ms. Frank is known for “extremely smooth finishes” and “lifelike expressions,” adding that “almost all of the big artists have a unique style.” The position of a model horse is nearly as important as color, she added. “The most marketable position is standing square,” while certain positions such as bucking have more limited appeal. For example, Ms. Frank would only craft a bucking horse for a private client.

The size of the model is also important – and sometimes a signifier of a particular sculptor’s work. For example, Maggie Bennett, a sculptor based in North Carolina, specializes in the “micro mini” size (1/54 the size of a real horse.) Like many of the sculptors I spoke with, Ms. Bennett is also a horsewoman in real life although she never had a horse of her own. She gravitated to the smaller size because they were the kind of horses she collected as a child, the kind you could put into your pocket.

Ms. Bennett casts her horses in pewter rather than the more commonplace plastic resin. “It’s really the best material,” she said. (The small size makes the use of pewter plausible – it would be much too heavy for a regular-sized model, she noted.) Ms. Bennett runs a subscription based model horse of the month club ($35 a month plus shipping with a free bonus horse) in addition to freelance sculpting work. “Like Barkbox,” she said. Ms. Bennett conceived of it as a way to make a steady income and it has been successful since its inception in January, 2016.

It isn’t surprising that women in the model horse world feel much the same way about their plastic or pewter horses as women do their “real” horses. The connection is just as vivid and real and can be described by the same word: Love.