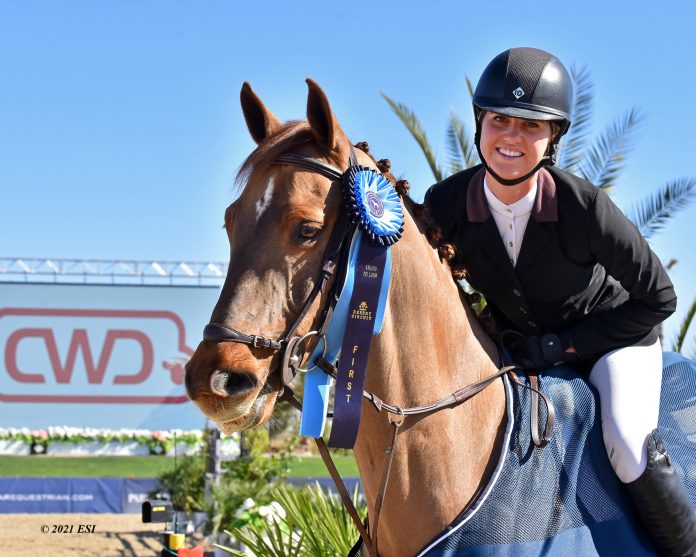 THERMAL, Calif.  – February 6, 2021 – Horses and riders took to the Grand Prix Stadium for the third FEI class of the week during Desert Circuit III. Twenty pairs raced against the clock and in the end it was Chandler Meadows (USA) and her own Christy JNR (Indoctro x Amira Van De Acaciahoeve) who jumped clear and crossed the timers at 71.83 seconds earning themselves the top spot in the FEI $36,600 1.45m CSI3*, sponsored by CWD.

The speed class, built by world class course designer Manuel Esparza (MEX), consisted of fifteen jumping efforts. The course included three combinations and multiple options for riders to make tight turns against an 84 second time allowed. “Walking the course, it was actually the perfect ride for me and my horse because there were lots of inside turns. He is very quick off the ground and loves to go fast,” explained Meadows. “My goal was to just keep him going forward, keep my position correct, and let him do his thing and it all worked out.”

Meadow’s mount may be small but he sure is mighty. The twelve-year-old Belgian Warmblood gelding has been paired with Meadows for the last year and a half and they have big plans ahead. “He is a small horse, definitely the smallest horse I have ever ridden, but he has a big stride and is super fast. There are always things that we are working on, but today it all kind of came together and I was very excited,” mentioned Meadows.

“He will show the rest of the FEI weeks here: weeks five, six, and eight. The rest of the year, we are joining one of the Major League Show Jumping Teams, Team 7, which I am very excited about. This is kind of just the stepping stone towards the next goal,” continued Meadows.