Home Blogs Breeding American Bred: Drake Steals the Show in and Out of the Ring... 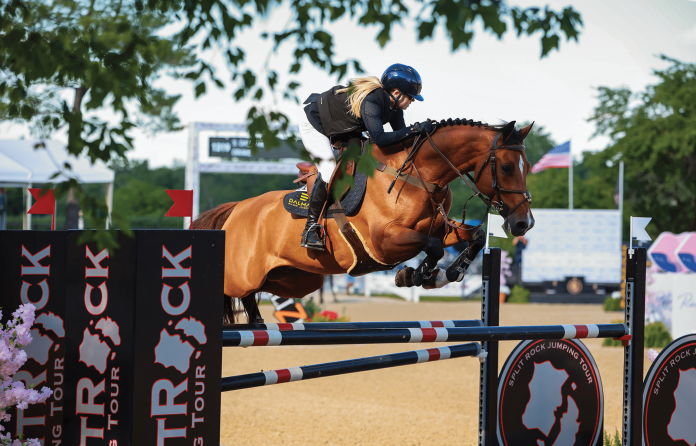 Through magnificent waves of thick black mane, Sandra Dalman looks at an oxer three strides out. Two symmetrical ears frame her view, both pointed forward, attention fixed on the fence in front of them. The two, horse and rider, sail over the obstacle with a burst of athleticism, and Dalman knows instantly that her instincts were correct—this horse is amazing, and she wants to be part of the next step in his journey.

“He was totally adorable, just a little ball of energy,” Dalman says. “He was tons of fun.”

Dalman had ridden this charming 16.1h bay gelding named Drake (Dulf Van Den Bisschop—Caretina III) before, but it only took one time jumping before she decided to buy the 7-year-old. That first jumping session was more than two years ago but Drake’s jump still inspires a smile for Dalman.

“You just get to the jump and just explode and you’re like, ‘Oh my gosh this is so cool!’” says Dalman. “I liked his eagerness and his attitude. He just loves to jump. He always gives his best effort. I thought he was a really cool prospect for the future.”

Drake’s sire Dulf Van Den Bisschop stands in the U.S. and carried Kelsey Cruciotti to a 2* Grand Prix win the year Drake was born. Bred by Pony Lane Farm in Utah, from the very beginning, Drake captivated the humans in his life.

“He was not an easy foal,” says his breeder Maura Thatcher with a grin. “The Dulf babies tend to have a little bit more attitude.”

Sass from the start, Drake also emerged with stunning looks that set him apart right away.

“He was very well put together, very pretty,” says Thatcher. “I have a vet tech who lives on the farm and helps me foal, and she said to me, ‘This one’s going to be special’. She predicted it and he grew up to be a really nice horse.”

Drake stands with a timeless elegance. Copper hues of his bay coat melt seamlessly into his jet-black mane and tail and the tips of his dubbed “perfect pony ears.” His neck carries a slight arc and his eyes are intelligent, exploring the world around him with equal parts curiosity and focus. Even before seeing him move, even before riding him, he catches attention.

“He is a photographer favorite,” Dalman says. “He is literally like America’s Next Top Model, his personality matches his being. He exudes self-confidence and he knows he’s handsome.”

To see Drake is only half the story. Luckily, he is more than just a pretty face.

“You get on and he picks up his trot and trots right off,” Dalman says. “He’s got a rocking horse canter, he’s super comfortable. He’s very well broke too—you can do lead changes every other stride and then you go to jump and he’ll be a little playful over the first few fences, then he gets right down to work. He rides to a cavalletti the same as he rides to 1.45m.”

Dalman and Drake have been through everything from injuries to FEI debuts. The pair has shown around the country finding success in 1.30m-1.40m classes at Split Rock, Kentucky, Traverse City and Aiken. Drake took home best American Bred honors at the 8-Year-Old Jumper Finals last year. Also last year, Drake made his FEI debut in Ohio with Dalman. Since then, he has had three FEI starts, finishing in the top 20 in two of them. After an injury sidelined Dalman for several months, she gave Drake a break from showing. The two were anxious to start competing again at this year’s WEF. The first class they entered, the $6,000 Bainbridge Companies 1.40m, they flew to 2nd place out of 31 entries.

Dalman has made a business finding promising talent and ushering them into the FEI ranks. According to her, not only does Drake love to win, he’s fun to ride.

“He’s just that little engine that never gives up,” Dalman says. “You ask for the really long distance coming into that meter 40 combination, and he just leaves the ground! Clears it and you’re just left like, ‘How did you just do that?’ And then you roll back on a vertical tight and get there way too deep and he just gets out of the way and then you just land and run down to the next jump and he just gets his feet out of the way again! ‘How do you do this?’ He just keeps getting better and better. It’s a cool feeling. You feel like he’s on your side and he’ll do whatever you ask of him. He really gets what you’re trying to do out there.”

“He has a lot of sass and attitude which I think is important to jump clean rounds,” says Thatcher. “He’s always wanted to do his job and that’s always amazing to me. Why do these horses want to do this? Well, it’s in their bloodline.”

Drake’s bloodlines are more than just a recipe for talent; they are a result of many people patiently pushing forward with American breeding. Thatcher is honest, noting that breeding here in the U.S. is not for the faint of heart. Where European farms have established large-scale breeding programs, American breeders are still trying to compete with quantity.

That’s why, when something special does come, it’s important to celebrate it. Both Thatcher and Dalman see Drake’s talent as a proud testament to the options American breeding is creating in the sport, even if it might take time to create it.

“I’ve always looked at it as, ‘Great, Drake’s out there winning,’” says Thatcher. “That means other people may want to buy horses from me, from my breeding program.”

“I like buying in America because I normally know the people that I am dealing directly with very well,” says Dalman. “Drake was bred here, and his career has been here, and somebody can watch him from the time he was four or five all the way through. He’s already shown at WEF, he’s shown in Michi-gan—he’s shown all the places and has been in all the rings, and I think that’s an asset.”

When Dalman thinks about Drake’s future, she often thinks about where they began. She and Drake’s journey together has been fulfilling, and while he has risen in the horse show ranks in level and success, Dalman is proud of the fact that in many ways, he has come full circle.

“When I bought him, he was young and playful and kind of like an adolescent. But now he really has developed into a great show horse and he is all business. He knows his job and he really enjoys it. I feel like I’ve kind of brought him to the level where he needs to be. Now it is time for him to have a new partner and take them through the ranks now,” she says. “I just know that somebody is going to love him and appreciate him for everything that he is, and he’s going to be a great asset to their team.”

Wherever his future takes him, Dalman will never forget how Drake’s pure presence inspires a fairytale flutter of horse girl whimsy.

“He really is just absolutely beautiful. His hair, his muscles, his chiseled face…he is just a stunning horse. And when you ride him, he’s just as stunning,” Dalman says.

Whether jumping the out of a 1.45m combination, or simply staring at him while in turnout, when you’re with Drake, it’s never a question—you’re in the presence of a star.

What’s In a Name?

From the moment Drake was born he already had a certain style about him. So much so, that when it came time for his breeders to name him, they bestowed an iconic namesake to match his panache. It’s no coincidence he’s named after the four-time Grammy award-winning rapper, Drake.

“They named him Drake because he’s always had that swagger,” says Dalman.

After Pony Lane Farms, Drake had a brief name change with a new owner, but when Dalman got him, she couldn’t help but reintroduce the name.

“I changed it right back to Drake because it just fits the horse so well.”

Whether it’s topping Billboard charts, or FEI classes, confidence and swagger are a must for superstars.

*This story was originally published in the March 2022 issue of The Plaid Horse. Click here to read it now and subscribe for issues delivered straight to your door!

American Bred: Meet the “Little Rocket” That is Henrietta