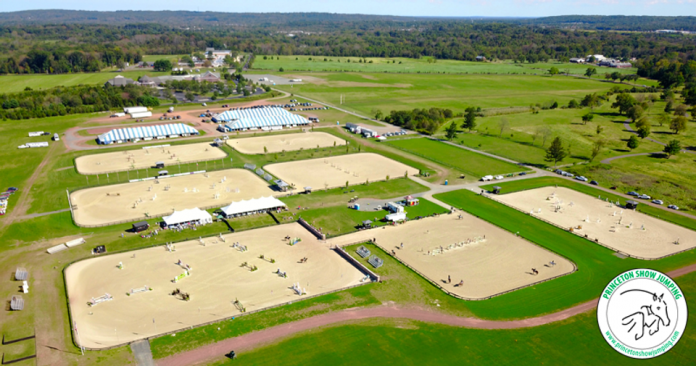 In the modern age of show jumping, surface is paramount. Ask Princeton Show Jumping Founder Andrew Philbrick, and he’ll tell you, he saw it coming.

He needs only to point to his surface in the arenas at Hunter Farms, which hosts 15 weeks of USEF Rated competitions as part of the Princeton Show Jumping show season in 2022, to prove his point.

“It really was my first priority when I built the place, and it really is what stands out to people,” he said.

Philbrick began laying the plans for Hunter Farms in 2011, but his ideas about footing were formed long before then—during his time in Europe, as both an international show jumper and coach.

So, he matched two ring builders from Germany with an American ring builder and sat them in a conference room at a New Jersey hotel to brainstorm. Then he set them loose to select their surface, which they examined—literally—under a microscope. Ultimately, the material they selected came from an unlikely source: It was a byproduct of making roofing shingles, located on a site in southern New Jersey.

“Every single bit of what went into Princeton Show Jumping initially came out of that one giant pile by a lake in South Jersey,” Philbrick said.

In 11 years, the footing has not only performed, but it also hasn’t changed much, thanks to critical full drainage systems under every surface. In Princeton Show Jumping’s International Ring and its schooling area, along with Ring 1, only some fiber has been added to “tighten up” the surface.

“The footing has been unbelievably consistent. The material is so good, it doesn’t shift much, and it hasn’t broken down much. It hasn’t gotten dusty, loose or soft,” Philbrick said. “We of course regulate that with water guns and water trucks. We drag it carefully, but we don’t really have to roll it much anymore.”

Adhering to Philbrick’s values in offering a high-quality horse show experience to every rider, at every level, all four competition arenas now boast the same surface, along with three schooling areas.

“We have had a slow process of people understanding what footing does in terms of keeping their horses sound, jumping well, and even keeping horses’ attitudes good,” Philbrick said. “It’s crucial to me, as a horse person, as a trainer, to be able to give everybody the kind of footing that they can count on.

“The idea that we were going to build a horse show based on top-quality, all-weather footing, was something that was incredibly important,” he added. “The old saying from horsemen is, ‘No hoof, no horse,’ and I’ve always felt, ‘No footing, no horse show.’”