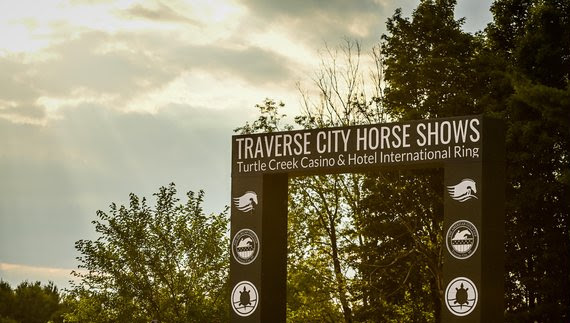 Acme Twp. MI — The Acme Township and the Traverse City Horse Shows (TCHS) look forward to working together to prepare for the upcoming “Horse Show Season” next month. TCHS is actively making progress for the opening of the 15th TCHS show on June 8, 2022, which generates revenue to local restaurants, housing and tourism, making the Greater Grand Traverse Region an equestrian sports destination.

“The horse show at Flintfields has been part of the community for 14 years and we are committed to being good citizens caring for the land and developing beautiful accommodations that support the community,” said Matt Morrissey, managing partner of Morrissey Management Group, owner of TCHS. “We are excited to welcome riders and spectators to another thrilling season of Olympic caliber hunter/jumper equine competition enhanced amenities developed in cooperation with Acme Township, Grand Traverse County and the State of Michigan.”

Acme Township officials and TCHS representatives met last Friday to review the progress made towards implementing the conditions of the township’s special land use permit. The vast majority of the conditions have been met, will be met shortly or are in the process of being addressed.

On April 5, 2022, the Acme Township Board approved a significant amendment to the special land use permit, which governs operations and development at the Traverse City Horse Shows. The amendment was unanimously approved by the Board with a number of conditions aimed at protecting the health, safety and welfare of the attendees of the event, surrounding property owners and nearby environmental features. Development and approval of the special use amendment was a long process which was initiated almost a year ago and went through five (5) public hearings before the Township’s Planning Commission.

TCHS’s economic impact reaches well beyond its many local vendors by providing bedding, hay and veterinary services to the farm operation. While TCHS at Flintfields Horse Park has been in continuous operation since 2007 under the new direction of Morrissey Management Group, in recent years, its “hunter/jumper” competition site has grown and attracts thousands of riders and spectators from across the country. Approximately half of participants rent or purchase homes in the area.

In December of 2021, Sport Management Research Institute (SMRI) reported that TCHS operations resulted in $112 million in economic activity annually for area citizens and businesses, including shopping, recreation, dining and lodging.

TCHS is licensed and sanctioned by the United States Equestrian Federation (USEF) in line with its mission “to provide access to and increase participation in equestrian sports at all levels by ensuring fairness, safety, and enjoyment.” This horse showgrounds and farm boards, which trains, and shows horses, is sanctioned to show horses during the year when it is safe for horses and riders. The facility is continually inspected by USEF officials making sure it strictly adheres to USEF guidelines.