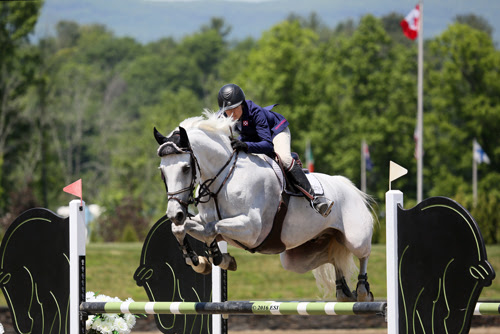 Saugerties, NY (June 3, 2016): HITS-on-the-Hudson Week II kicked off with the $10,000 Brook Ledge Open Welcome. Thirty horses and riders tested the course designed by Oscar Soberon, but only one team would take home the blue-ribbon title.

It was Saugerties, New York, equestrian Heather Caristo-Williams who stole the show on her own turf aboard Cosmopolitan 30, owned by Mr. & Mrs. Ralph Caristo.

“I’m overjoyed with this win, we are always happy to back at HITS,” said Caristo-Williams. “Of course, I’m always thankful to have the support of my family, friends and sponsors; when I win, it’s really a win for everyone.”

Nine advanced to the immediate jump-off to compete for the top spot. First to go clear in the jump-off was Debbie McCarthy Connor of Patterson, New York, and EF Eline, owned by Edition Farm. With a few top five victories under her belt in Week I, they confidently took to the jump-off course, clocking in fault-free in 43.398. They would eventually earn fifth for their efforts.

Two trips later, Anne Kursinski of Frenchtown, New Jersey, would shave a full three seconds off Connor’s time with a clear jump-off round in 40.530 aboard Caspar’s Lasino, owned by Market Street, Inc. The round would ultimately earn them the third-place prize.

The lead did not stay in the hands of any one rider long, until the victors, Caristo-Williams and Cosmopolitan 30, arrived to contest the shortened course.

“The course was nice. It had a couple of roll-back turns and a tricky long approach to a vertical—it was a good challenge at parts, and you had to slow down to make your turns,” said Caristo-Williams. “My plan for the jump-off was not to go too fast and focus on navigating the ground efficiently.”

They powered through the jump-off, opting for the tight approach in a mid-course roll-back turn. The crowd cheered as they crossed the timers in a speedy 38.581, where the lead would remain.
“He’s a lovely horse to ride,” said Caristo-Williams of Cosmopolitan 30. “He’s handy, and very fast without me having to push him, which helps keep me level-headed in the course.”

Matthew Williams, of Fort Lauderdale, Florida, followed to try his hand at the course. After a clear first round, he piloted Cuchica, owned by Wyndmont, Inc. through the jump-off. The seconds were winding down as they stopped the clock at 39.684 for second-place.

Following Williams, Southampton, New York, equestrian Jonathan Corrigan and Beechfields Astra Zeneca, owned by Colm McGuckian, put down a valiant ride. They would pass the timers without any rails, but their time of 43.683 was just a hair short of the top five, settling them in sixth.

Debbie McCarthy Connor re-entered the ring as the last trip with a jump-off. This time, she piloted Zim, owned by Connor & Ebetino Jumpers, LLC. They stopped the clock at 41.971, a full two seconds ahead of Connor’s previous time on EF Eline four fourth-place, sealing two spots in the top five.