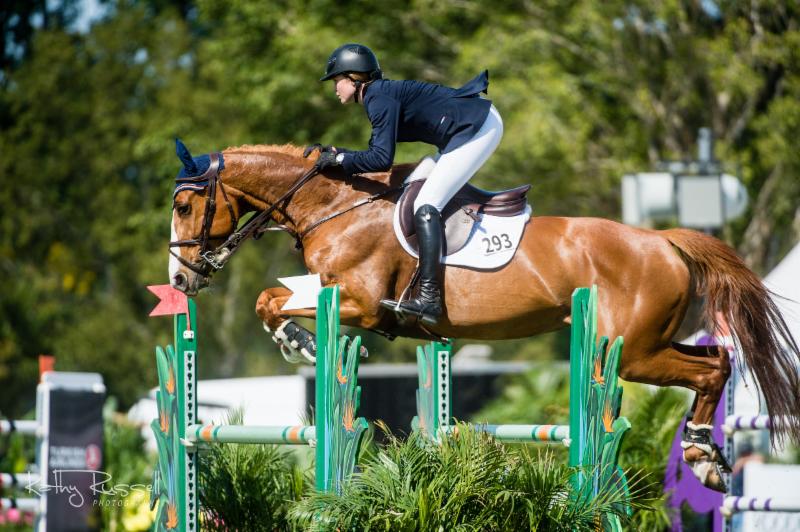 Field and Tess Du Jalness, a chestnut mare by Baloubet Du Rouet and owned by Hidden Brook Farm, were last to go in the jump-off, where riders were given the option of staying in the ring to immediately jump-off or waiting until the end of the first round. Field opted to wait, with a very good result, a clear round in the winning time of 39.173 seconds.

“I didn’t have a choice,” Field said jokingly of the decision to wait to jump-off. “I ride with Norman [Dello Joio] and you do what Norman says. But seriously, it was a long course and it is hot today so to let them relax and have a drink was a wise choice. It worked out well for me.”

Olympic and World Cup veteran Mario Deslauriers aboard his Jamaica Van Paemel had opted to stay in the ring and complete the second round. They jumped penalty free in a time of 39.196 to lead the class until the very last when Field bested his tie by 2/100 of a second to take the win.

“Philip Richter was very helpful,” continued Field. “He watched Mario go and said that to the last fence Mario was a little wide. I know that Mario is usually totally unbeatable, so I had no thought that I would beat him. Philip said just land and go. Fortunately, she likes to run away, so my thought was to just let her run away to the last fence and the distance should be there, and it was. She was great.

The $2,000 Classic Champions 6-Year-Old Jumper Time First Jump-Off class was won by Schuyler Riley with Louise Graves’ VDL Glitter Van De Kalevalei. None of the horse and rider combinations managed to post fault-free performances in the first round, and so there was a jump-off among the three entries who posted four faults. Riley and VDL Glitter Van De Kalevalei turned in a clear round in the jump-off to claim victory.

“We had a fabulous time out there on the grass,” said Riley. “I rode here on Friday with this mare and she was exceptional, she took second place. I was really looking forward to coming back today, and she jumped even better. I think that this is an incredibly valuable experience for a young horse, there is no better place to develop one than on this grass course.

“We actually just got Glitter about four weeks ago so we are just getting to know her. I have some training shows at my own facility on the grass, and she jumped well on the grass, so I decided that this was the perfect venue to try to bring a potential Grand Prix horse along. She really rose to the occasion. I am incredibly impressed with her brain, rideability and scope. I think there is a good future for this horse.”

Second place in the class went to Charlotte Jacobs riding the North Star entry, Hi-Jack. The pair posted four faults in the jump-off in a time of 36.831.

Riley returned to the winner’s circle with the Wolfstone Stables entry G-Force, as they took first place in the $4,000 Classic Champions 7-Year-Old Jumper Time First Jump-Off class. G-Force and Riley were the only pair who were able to post double clear rounds for the win.

“My trip today on this horse was amazing,” said Riley. “The course designer did a wonderful job, setting a challenging but doable track. I feel that my young horse came here this week and was not only competitive but learned a lot. For me, I could not have expected a better week.

“G-Force won the first day, and then on the second day I got a little bit conservative at the end, so we were second, and then he won again today. My horse definitely improved through the week. I

couldn’t ask for anything more. This horse is incredibly intelligent, the whole time on course he asks you what you want. He tries to be careful, and just does his best every time out.”

Kennedy Z and Kara Chad emerged from the ring with second place in the class. Kennedy Z, owned by Gut Einhaus LLC, is by Kashmir V Schuttershof out of Donnerlitchen. The pair had one rail down in the jump-off in a time of 37.033 seconds.  In addition, Kennedy Z was given the Award of Distinction  for the 7-year-old division.

Third place went to Olympic veteran Ben Maher and Celina, owned by Jane Forbes Clark. Celina and Maher had four faults in the jump-off and posted a time of 51.901 seconds.

Created in 2015 by Cynthia Hampton, Classic Champions Tour is specifically for 5, 6, and 7-year-old jumpers and is based on European principles which modernize the show experience for young horses in North America. Created by experienced, specifically-trained course designers, the courses are made to fit horses’ age with adapted heights, types of fences, lines, and turns, all over top-notch footing, which is a trademark of Deeridge Farms. The series gives young horses the opportunity to compete at different shows to develop their experience and it helps them become the future stars they can be.

“My goal is to offer adapted classes and also to educate riders, trainers, breeders, course designers, judges and officials,” said Hampton. “We need a viable structure capable of identifying, selecting and educating future high-level horses. I believe that we can breed and develop future athletes capable of distinguishing our region both at home and on the international stage.”

“We think it’s extremely valuable for young jumpers to get the best education and show experience possible right from the start, which is why we are delighted to include the Classic Champions classes at our shows,” said Lou Jacobs, event co-founder along with siblings Charlie Jacobs and Katie Robinson. “It’s always exciting to watch as young horses start their careers and develop through the levels.”

The Classic Champions young horse classes are non-USEF rated, held in Deeridge Farms’ beautiful grass Grand Prix Ring, and offer $20,000 in prize money. In addition to the general results, the judges of Classic Champions Tour classes will reward one horse per generation with the “Classic Champions Award of Distinction.” The goal being to highlight jumping style, quality of canter and rideability.