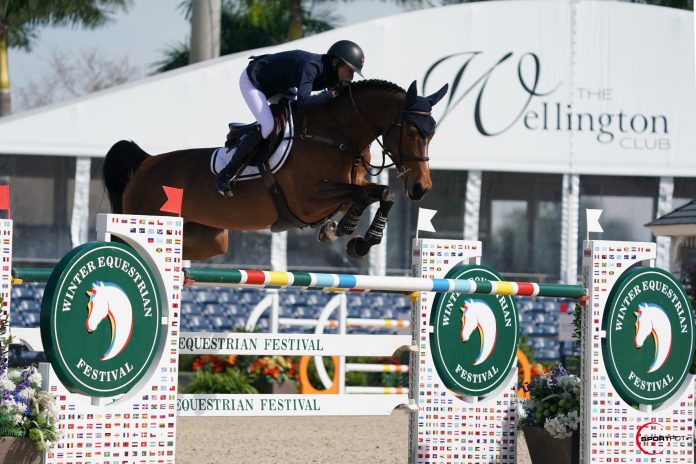 Elite international show jumping continues during Week 1 of the 2021 WEF with the first Saturday night under the lights in the $137,000 Wellington Regional Medical Center Grand Prix CSI3*. The class will be shown for free on the livestream. Competition continues for another 11 weeks as part of the winter circuit in Wellington, Florida.

Friday morning’s test was set by Anthony D’Ambrosio (USA) and Andy Christiansen Jr. (ECU) with a total of 48 entries contesting the 1.50m track, and nine qualifying for the jump-off. Cawley aboard the 10-year-old KWPN mare for Louisburg Farm navigated the course with precision to edge the current leader by more than five seconds as she crossed the finish line fault free in 36.54 seconds.

Last to return for the jump-off, Ireland’s Paul O’Shea gave Cawley a run for her money as he and Chacanntus owned by Eye Candy Jumpers put forth a valiant effort with a clear round, stopping the timers at 38.95 seconds. It was 2008 Olympic individual gold medalist Eric Lamaze (CAN) rounding out the top three aboard Dieu Merci Van T & L for Rein Family, LLC, and Little Creek Investments Inc, with a double-clear effort in 41.83 seconds.

“I watched them all go [in the jump-off] and most did seven [strides] from fences one to two,” said Cawley. “My horse is really quick; she’s such a fast turner so I ended up getting six from one to two, and then she’s just so ‘on it’ in the jump-off always. I knew I needed to keep going to beat Eric [Lamaze] because even Eric going a little conservative is quite fast. I had Paul [O’Shea] coming behind me and he’s always fast, so I didn’t feel like I could play it safe. She was great!”

Cawley has had Berdien since she was a six-year-old and brought her over from Europe shortly after that. The pair has experienced success from day one, but the mare was forced to sit out last year’s WEF after coming down with an illness while shipping south for the winter. Friday’s win was just one of many positive steps during her recovery and return to the show ring.

“She had the winter off and she’s been showing again starting this summer and now she’s back to her good-old, top-form self,” she said. “We want to get her up into the CSI3* Grand Prix classes and keep going. She’s 10 this year but she missed a good chunk of last year, as did many horses, so she’ll tell us how it’s going to go, but we’ll keep her where she’s winning.

As for the rest of WEF, Cawley, a familiar face on the showgrounds, will spend a lot of time focusing on prospects for the future.

“I’ve got some young horses coming up that I’m excited about,” she said with a smile. “Adamo [her long-time partner] is getting into the latter years of his show jumping career, so we’ll pick and choose sparingly. We’ll show where we think we can be competitive.”