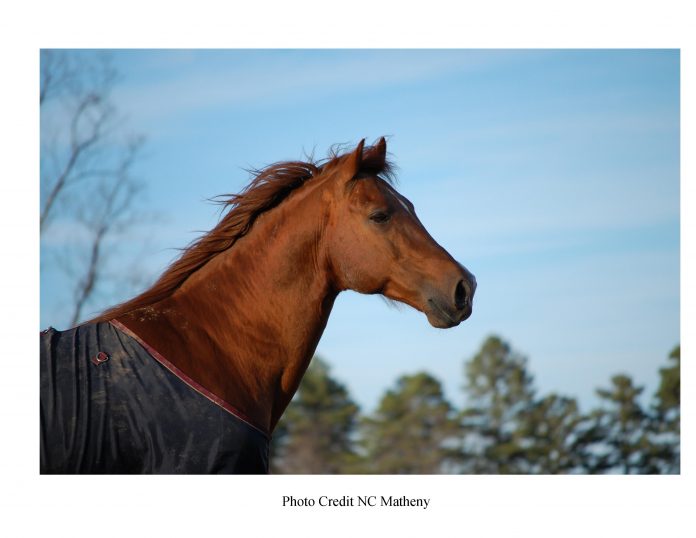 Horses have a way of wrapping their way around your heart. This was what happened when I found a wee Tennessee Walking Horse orphan. Knowing the foal faced extraordinary odds, I felt the connection and knew I was to be his human. A colt of good bloodlines – the direct descendant of champion Midnight Sun and Prides Generator, his beauty was undeniable.

Traveling to an Ohio farm, I saw the foal in a stall all alone. He was long-legged and wobbly but sure on his feet. At first we called him “Trouble”, then officially “Hard Way to Go” and finally “Casey.” The little Tennessee Walking Horse was destined to bring joy and happiness.
I took the foal home and the journey of a lifetime began.

That was in 1998. Through the years, Casey grew into a beautiful chestnut stallion. A friendly, playful, and intelligent horse. From the moment I brought Casey home, we built a relationship of trust. Casey learned essential things about being a well-mannered horse, and I learned the importance of leadership with clear communication.

I built Casey a unique barn close to my house so that I could keep an eye on him. His routine was simple – in all night (because we have bears and coyotes in the nearby woods), out to pasture early morning, inside during the day, out in the late afternoon, then back to the barn. I enjoyed spending time in the barn with Casey, so I hung an air chair and installed a 24 inch TV built into the wall of his stall. We would sit and watch TV together in the evenings. If I got tired during the day, I hung a hammock in the stall where I could take a nap with Casey. It was fun, and life was good.

But things weren’t always perfect. Like any horse owner, I struggled with Casey’s ailments. Some were worse than others. One time Casey had a 360-degree torsion, which means that his colon twisted onto itself. When he rolled, his large intestine would swing. He did this process again and again. The more he rolled, the more he became twisted… 360 degrees.

As they prepped Casey for surgery, they escorted me to the viewing window to watch. Casey’s vet asked if I was okay. She was concerned I was going to pass out. “You’re whiter than the snow falling outside. We are concerned that you are not okay.” She took care of me as well as Casey.

Immediately following surgery, the doctor looked at my friend and said, “I want you to take NC and get him something to eat and get him off this property. I have seen his relationship with this horse, and they are connected at a spiritual level. When Casey comes out of the anesthetic and senses NC’s presence anywhere on this property, he will not come out successfully. He will try to get to NC. His safety is with NC. I saw it in the exam room when we were examining him. When NC was out of eyesight, Casey fell apart. Casey became violent and uncontrollable. When NC came back to the exam room, Casey became stoic. NC has a connection with Casey that is unbelievable. We will call you when Casey is standing, and it’s safe for NC to come back.”

Casey remained in ICU with round-the-clock care for four days. At the end of his stay, he recovered completely and the vet sent him home with medication. Later on, he developed ulcers and at the end, testicular cancer. The cancer was untreatable, but Casey tolerated it well. He continued to run and play in his pasture, being friends with everyone who came to see him.

Casey and I were undoubtedly connected. That’s what happens when you give your undivided attention to a horse. They become a part of your family. At the age of 22, Casey passed away on October 30, 2020. I miss him and everything we shared over those 22 years. He was the horse of a lifetime.

For I know the plans I have for you,” says the Lord. “They are plans for good and not for disaster, to give you a future and a hope. Jeremiah 29:11 NLT

Recently, NC documented his life with Casey in his new memoir, Hard Way to Go: The Horse of a Lifetime.

Ride and Die: A Look Into Why Riders Struggle With Body Image Distortion and Eating Disorders

Supporting the Future of Show Jumping with Young Horse Programs and...