Home Press Release Amanda Derbyshire & Cornwall BH Storm to the Top of the $74,000... 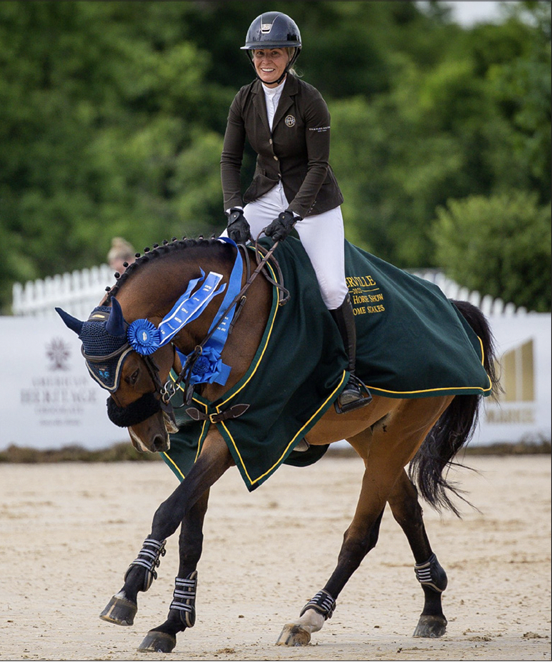 With several riders accumulating time faults in the first round, the British rider tuned in only the second clear round of the day, guaranteeing a jump off. “I was hoping there wouldn’t be many clears, so we didn’t have to go that fast,” laughed Derbyshire. “But more and more riders went clear and with McLain (Ward) and Beat (Mändli) behind us I knew the jump off was going to be fast.”

With a simple plan to go fast and clean in the jump off, Derbyshire did not hold back, making a strategic slice to the third to last fence, followed by a confident charge down the final line in eight strides to seal the win in 34.96 seconds. The victory at Upperville followed on the heels of their win in the Kentucky Spring 1.45m CSI 3* in Lexington, KY two weeks ago.

“He can be a little cheeky sometimes,” said Derbyshire. “In the past I’ve gone fast but he’s always ducked out a little bit, so I always settled for third or fourth and a double clear. I gave it my all and he gave me the confidence to keep trying to go fast. I guess he’s figured it out at 14 years old! Cornwall BH, a bay Holsteiner gelding by Con Air, is owned by Gochman Sport Horses and has been a part of Derbyshire’s barn for six years.

“We’ve had this horse since he was 8 years old and he has done a lot of great things for me,” Derbyshire said of her partner. “He always tries to jump clear. I think it’s taken me six years to win a couple classes on him, and in the last month he won two big Grand Prix classes and I couldn’t be happier with him.”

While it may have taken a bit to achieve multiple wins, Cornwall BH has been a consistently placed horse for Derbyshire, bringing home FEI ribbons from Devon, Kentucky and the Winter Equestrian Festival. She credits his sweet character, instinctual carefulness and great try for their success. “He is the sweetest horse, like a dog,” she smiled. “He always talks to you when you go to the stall, and he does a lot of loose grazing.”

“Every time he goes in the ring, he tries to jump clear,” she said. “Deep or long, he always tried to get his legs out of the way, and I owe him a lot for that. He’s been a brilliant horse for me.” Derbyshire and her team have been coming to the Upperville Colt & Horse Show for seven years and delight in spending the week in the Virginia countryside, so much so that the entire barn made the trip this year.

“We love it here,” she said. “We love riding in the grass field before we show, we love the Town of Middleburg and the nightly dinners; there’s a little bit of everything for everyone, even the horses. It’s a place we can bring hunters, young horses and the Grand Prix horses to and they can all show in the same place in the same week. And the hospitality is the best of anywhere!”